Hide Search
You are here: Home / Diet/Raw Diet for Cats / Breathing Easy with a Raw Diet

Breathing Easy with a Raw Diet

Well, it’s been about a month since I began this whole raw meat journey, and it’s been about two weeks since I have consistently been feeding the cats the raw diet. Let me tell ya… It’s been AWESOME!

Sophie, our CH kitty, is the raw meat star. When we first got her, she had irritable bowel syndrome and chronic upper respiratory infections. We were having to give her baths on a daily basis because she always came out of the litter box a complete mess. I won’t go into details, but cerebellar hypoplasia + IBS = messy disaster. She was also constantly congested. She always had a crusty nose, had trouble breathing, and she sneezed out the biggest and nastiest boogers I have ever seen in my life. Bobby and I referred to them as “toxic” boogers because whenever we would spray carpet cleaner on them to clean them up, it would foam and bubble like we were fighting some kind of toxic waste,

Now don’t get me wrong – I would have happily given Sophie baths and cleaned up her boogers every day for forever, and so would Bobby. She’s totally worth it! But I know that not only were these issues troublesome for Bobby and me, they were even more troublesome for poor Sophie. I can’t imagine what it must have been like to have an upset stomach or to have to struggle to breath every day of your life. Luckily, I don’t have to imagine it anymore, and Sophie doesn’t have to deal with it!

Since we started the raw meat diet, both of these issues have disappeared. DISAPPEARED! COMPLETELY! Her IBS had actually cleared up when we switched her from the Friskies canned food to the Wellness grain-free canned food. We didn’t see any improvement with her respiratory troubles though. We had even tried two different antibiotics for it from the vet, which did absolutely nothing. However, within just a few days of feeding her the Blue Ridge Beef raw meat, her congestion disappeared. No more boogers. No more wheezy mouth breathing. No more crusty nose. She is breathing easy and loving every second of it.

She is also a HUGE fan of the diet. She gets so excited at meal time, she runs around in circles making her adorable little chirping noise. She eats her food up in 10 seconds flat, and then she chirps and cries for more. She has never shown so much interest in meal time before. Delilah and Sampson are enjoying the diet as well, but no one is loving it as much as Sophie.

Surprisingly enough, I have been enjoying it too. I never thought that I’d ever say that I enjoy anything having to do with meat, but just knowing that every time I feed my kitties I am helping them and making them healthier gives me such wonderful satisfaction. I love that I have to fight them off the counters and out of the kitchen when I’m making their food. I love watching them eat their food right up and then start looking for more. This may sound crazy, but I feel like I’ve bonded more and gotten even closer to the kitties since we started this adventure together. I am loving everything about this diet.

If you haven’t already gathered this, I highly recommend the raw meat diet to anyone with pets! It’s a great experience for everyone involved. We’ve only just begun here in the Hall Household, and it has already been the best decision we’ve ever made regarding our cats. I am looking forward to even more happiness and healthiness! 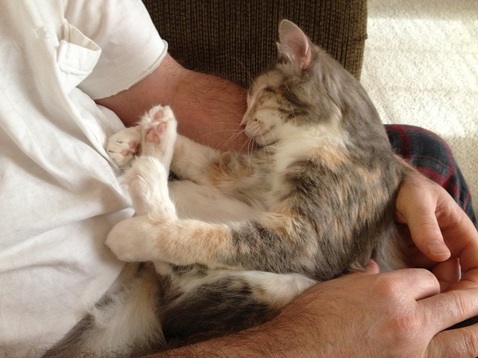