As you probably know, raising awareness for special-needs animals, particular cats with cerebellar hypoplasia, is a very important cause to me and is one of the biggest driving forces behind this blog. My wobbly girl, Sophie, is a huge inspiration in both mine and my husband’s lives, and I love to share her story with the world to both educate and maybe even inspire someone else to take in a special-needs kitty like Sophie.

For all of Sophie’s struggles though, I know there are cats (and dogs) out there who face even more obstacles and hurdles than she does. Sophie has a mild-moderate case of CH, but there are plenty of cats out there with more severe cases; some who can’t even walk on their own. I know I’ve been faced with the question of “Why bother?” on more than one occasion, so I know the amazing individuals who adopt cats with severe CH must face hurtful questions and comments like that even more frequently.

For this reason, I’d like to take the opportunity to give you a glimpse into what it’s like to share a home with a more severe CH kitty, who also happens to have several special-needs. I hope that by doing so, you will see how truly incredible and worthwhile these cats are. 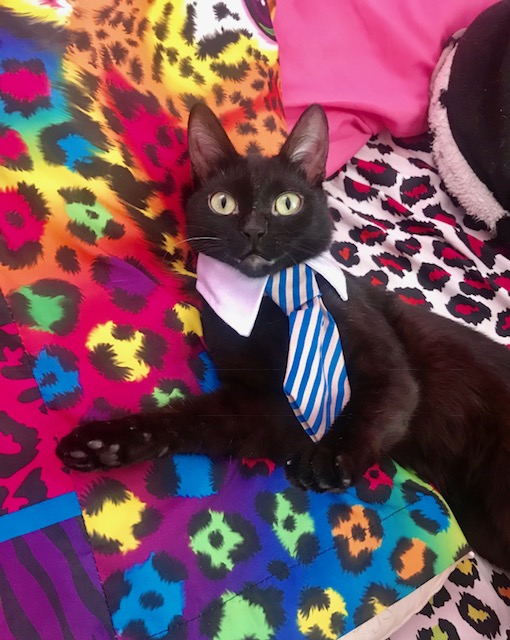 Mr. Wobbles has a moderate-severe case of cerebellar hypoplasia. He also suffers from hyperesthesia (abnormal sensitivity to stimuli of the sense and touch), epilepsy, blindness, and he has no teeth. Mr. Wobbles’s biggest struggle is walking (he can only walk a few steps before falling over), and he can’t climb furniture or stairs. He has difficulty eating on his own because he falls backwards into a somersault when he lifts his head with the food. Despite all of these challenges, some of them seemingly insurmountable, Mr. Wobbles lives a happy and full life, thanks to the humans in his life.

Before Mr. Wobbles landed the home and family of a lifetime, he managed to survive outside alone on the south side of Chicago. It is unknown how long he was out there or how he even managed to survive. But against all odds, he made it. He can barely walk, he can’t eat on his own, and he is completely defenseless against other animals. After being picked up off the streets, he was at a high kill shelter and set to be euthanized on the same day a no kill shelter showed up and rescued him. As Mr. Wobbles’s human Jen had fostered wobbly kittens in the past, the no kill shelter knew she would “foster” him. Had they showed up a day later, it would have been too late for him.

Ways to Help a Moderate-Severe CH Cat Like Mr. Wobbles

Mr. Wobbles take phenobarbital to manage his epilepsy, and he wears pheromone collars to help with his hyperesthesia. He also has pheromone diffusers placed around his home. It’s his cerebellar hypoplasia-related challenges that have presented the biggest hurdle, however. Thankfully he has incredible humans in his life who go above and beyond for him and are willing to get creative and resourceful to make life easier for him.

Jen has found that elevated food bowls seem to help with eating, and she even hand-feeds him so he doesn’t have to lift his head as much. It’s Mr. Wobbles’s innovative feeding stable that has been the biggest help in the meal-time department though. Designed by Jen’s brother Scott, this feeding stable secures him while he eats so he doesn’t fall. 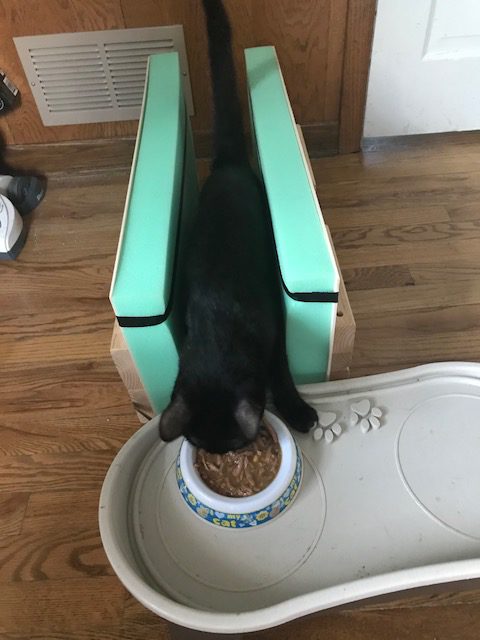 Like my Sophie, Mr. Wobbles struggles a lot while using the litter box, as he cannot hold himself up. He also can’t get over the lip of a standard litter box, so Scott made Mr. Wobbles a custom litter box with a flat entryway so he could stumble right in. Jen also puts out pee pads for him, as they are easier to use than the litter box.

Mr. Wobbles obviously has a lengthy list of challenges and special considerations. But when I asked Jen about the victories and accomplishments he’s had, the list she gave me in response was even longer.

He is a shining example of strength and determination in the face of opposition. He never gives up on anything. Jen says, “He wakes up every day as happy as can be and determined to live his life and walk around in the best way he can. He never stops trying!” 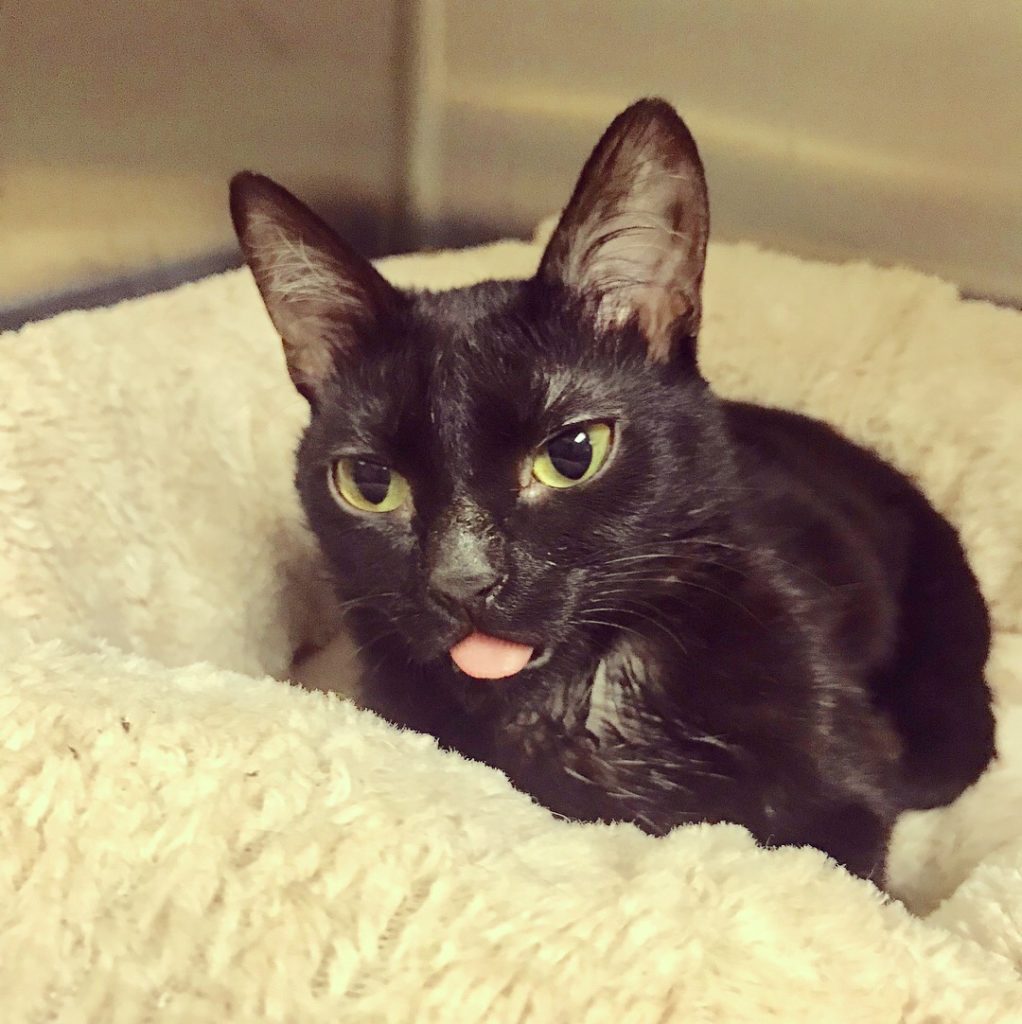 One time, he walked up an entire flight of stairs by himself. Before that, no one had never seen him climb even one stair or piece of furniture. He can hardly even walk. But one day, Scott was upstairs, home alone, and Mr. Wobbles was downstairs. Scott eventually found Mr. Wobbles at the top of the stairs. He wanted to be with one of his humans so badly that he made a very courageous and dedicated journey up the stairs. Against all odds, he fought hard and got himself up there!

Another one of Mr. Wobbles’s accomplishments is his ability to steal the hearts of everyone he meets. He charms them all and genuinely has a positive impact on them. Everyone is blown away by Mr. Wobbles and his story, which makes him the perfect advocat for special-needs handicats everywhere!

If your heart isn’t melting already, it will be when you read this next Wobbles story. Jen fosters newborn kittens throughout the year (including other special-needs kittens), and Mr. Wobbles always takes it upon himself to serve as Foster Dad. He cuddles them, licks them, bathes them, sleeps with them, and plays with them. He is the best and most gentle, nurturing, loving Foster Dad a kitten could ask for. 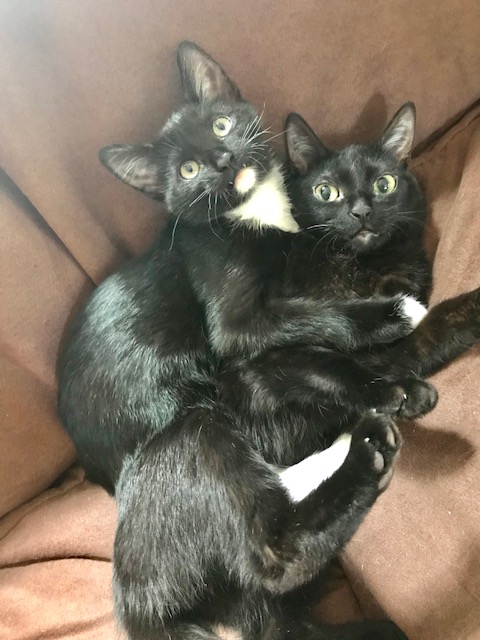 Open Your Mind & Your Heart

Though you and I may be able to see the value and importance of the lives of cats like Mr. Wobbles, there are unfortunately still many people out there who don’t agree. Sadly, Jen has faced a lot of controversy surrounding Mr. Wobbles. Some people think he is suffering, in pain, or has a decreased quality of life. 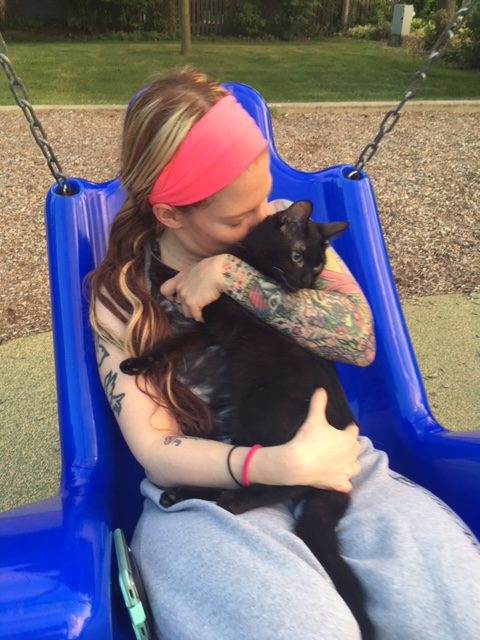 This is what Jen has to say about that:

“I would say that is a very close minded approach. I wish people would do more research before they are so quick to cast judgement. My cat is not in pain, he isn’t slowed down by CH, and he doesn’t know any other life. He lives his life every day to the fullest.

Wobbles is the happiest cat I have ever known. He also has the best quality of life any cat could ever ask for. He has never known a day without love since we adopted him. Every day I try to celebrate and honor his life, as he is the best thing that ever happened to me. He spends all day playing with the other cats in the house, chasing after them, playing with the laser pointer, and cuddling with his humans. He spends every night being the little spoon in bed with me. Every day (weather permitting) we spend time outside since he loves playing in the grass. Every weekend we have a picnic in the park. We take him in his stroller and let him play in the grass and hand feed him yogurt or ice cream. He loves having picnics. 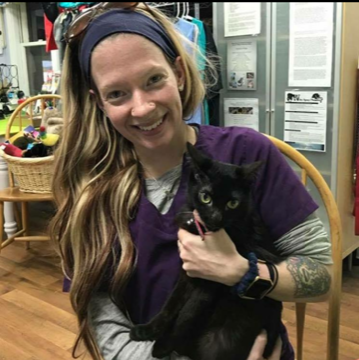 Mr. Wobbles is obviously a happy cat. He is loved, well-cared for, and he enjoys himself on a daily basis. If only people would spend a little time getting to know cats like Mr. Wobbles and see that they really are truly happy, the world would be a much better place. There wouldn’t be so much judgement, special-needs cats wouldn’t be euthanized needlessly, and more people would have the chance to be touched and inspired by these amazing animals.

The answer is simple. Handicats like Mr. Wobbles need homes and love just as much as, if not more than, all the “normal” ones. Plus, they’re just plain awesome. They will brighten your home, give more love than you could ever imagine, and teach you valuable life lessons. In Mr. Wobbles’s case, he has taught his family to never give up, and to get back up after each fall or set back in life. 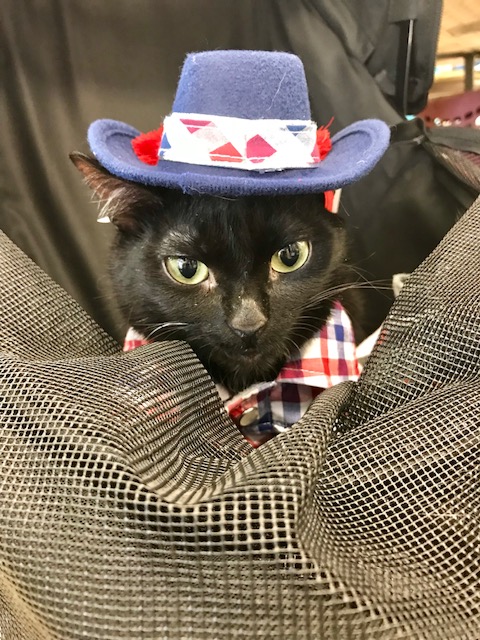 In the face of so many obstacles in life, Mr. Wobbles has not just survived; he has thrived. He is a handicat extraordinaire if there ever was one! 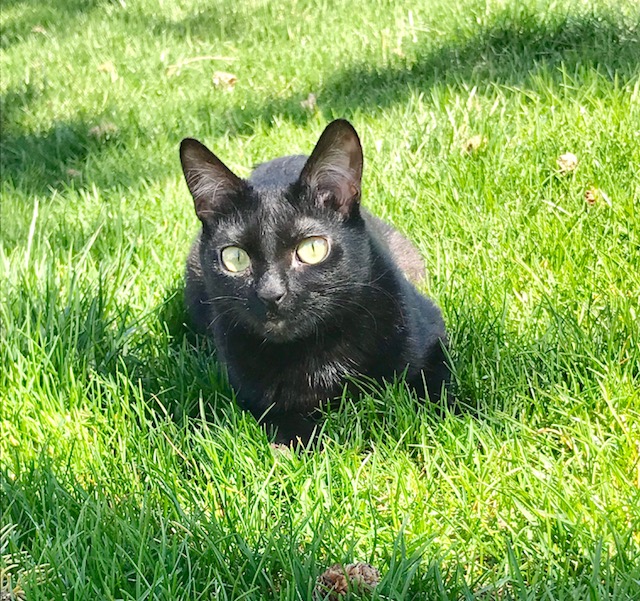