One of the most frequent questions I get asked about my adventure cats is how I got started taking them out and about. My adventure cat journey actually began several years ago with Sophie. If you don’t already know, Sophie has a neurological disorder called cerebellar hypoplasia that causes her to be wobbly and unsteady, lacking coordination and fine motor control. One day, my husband and I decided to take her out in our backyard to play because we knew we wouldn’t have to worry about her running off. She can’t run very fast, after all. Long story short, she absolutely loved it. We eventually started taking her out more and more, and I quickly came to the realization cats with cerebellar hypoplasia (CH) make the best adventure cats! 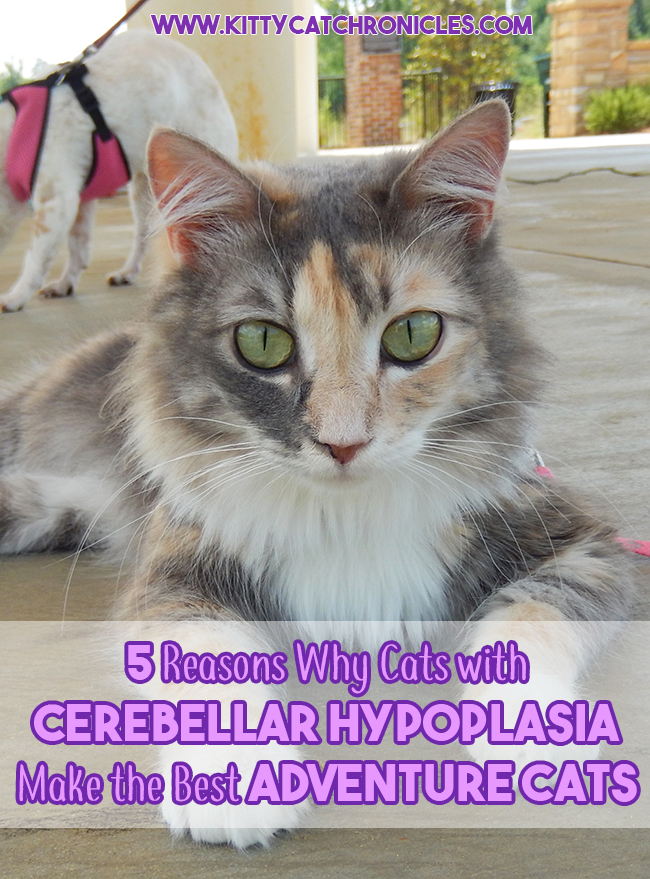 1. You don’t have to worry about them getting away.

Depending on the mobility level of your CH kitty, you probably don’t have to worry too much about her running off or getting away from you while outside. Adventure cats managing to slip out of their harness while outdoors is a big concern, but with CH cats it’s not something you have to worry about as much. Sophie can run, but she’s not nearly as fast as a “normal” cat. She will likely lose her balance and fall over during her running spurts anyway. In other words, if she were to slip out of her harness, she wouldn’t get very far before I was able to catch her. This eliminates a potential stressor from our adventure time together! 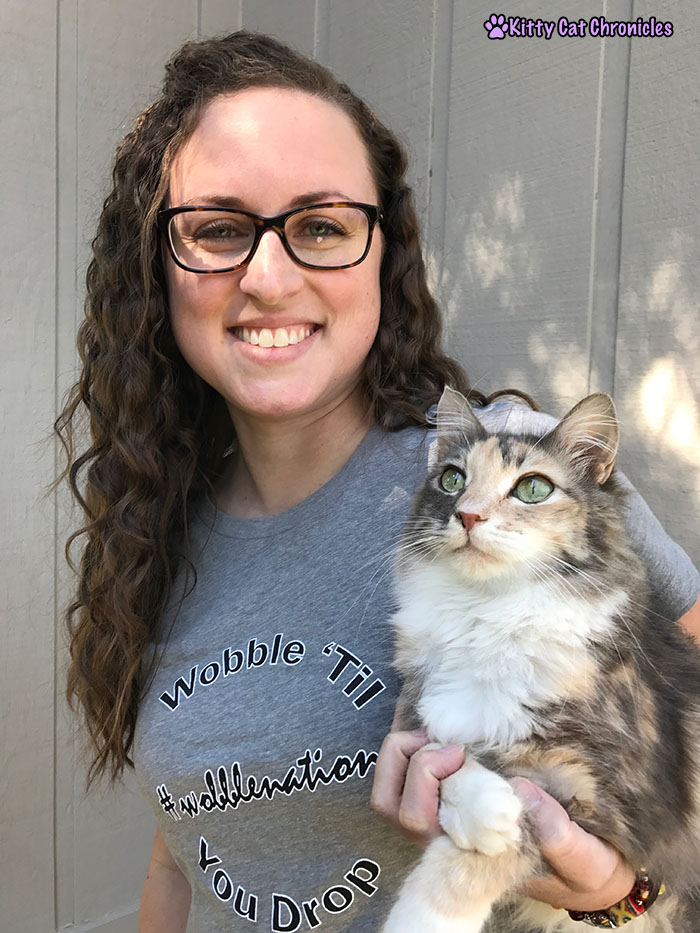 2. Adventuring with your CH cat is a great way to raise awareness.

CH cats make the best adventure cats because they not only make adventures more fun, but they give your adventures an extra sense of purpose and meaning! When we are out with Sophie on adventures, I will undoubtedly get asked about her funny walk. While some people can be rude about it, many people are curious and interested. This allows me the opportunity to educate and advocate for wobbly cats and handicats everywhere! I can’t tell you how many people I’ve met while out and about who didn’t know about CH before they met Sophie. I can only hope that maybe they’ve now shared about it with others or maybe even considered adopting a handicat themselves. Education is the key to saving lives, after all!

3. Cats with cerebellar hypoplasia are fearless!

Sophie is almost completely fearless (sometimes to her detriment). She crosses paths with a dog – no big deal. A loud car drives by – who cares?! Some loud noise occurs – Sophie doesn’t bat an eye. No matter what happens when we’re out and about, Sophie remains undeterred from her explorations. In fact, lack of fear seems to be a common personality trait among CH cats in general. I think it probably has to do with the fact that they are constantly having to face challenges and obstacles, and simple things like jumping up onto the sofa can end in embarrassing, and sometimes even harmful, falls. They have a unique sense of determination and intrepidness. As a result, they make the best adventure cats!

4. Adventuring with CH cats gives them a chance to broaden their horizons.

Cats with more severe cases of cerebellar hypoplasia are a lot more limited in their abilities than my Sophie girl is. Some can’t walk much, if even at all. While I wholeheartedly believe that even a cat with the most severe case of CH can live a happy and full life, it takes some effort on the part of their human to make it so. The CH cat community is full of big-hearted and wonderful people, and we have “met” so many through Facebook, Instagram, and our blog who care for cats with severe cerebellar hypoplasia and give them the most amazing lives. Lives that even a “normal” cat would be jealous of.

One of the ways some of these people do that is by taking their CH kitties outside for adventures. Whether it’s just to lie in the grass of their own back yard, or riding in a stroller through the park, these cats are getting out and doing things in spite of their CH. They are being given the opportunity to broaden their horizons, and it’s just plain awesome. 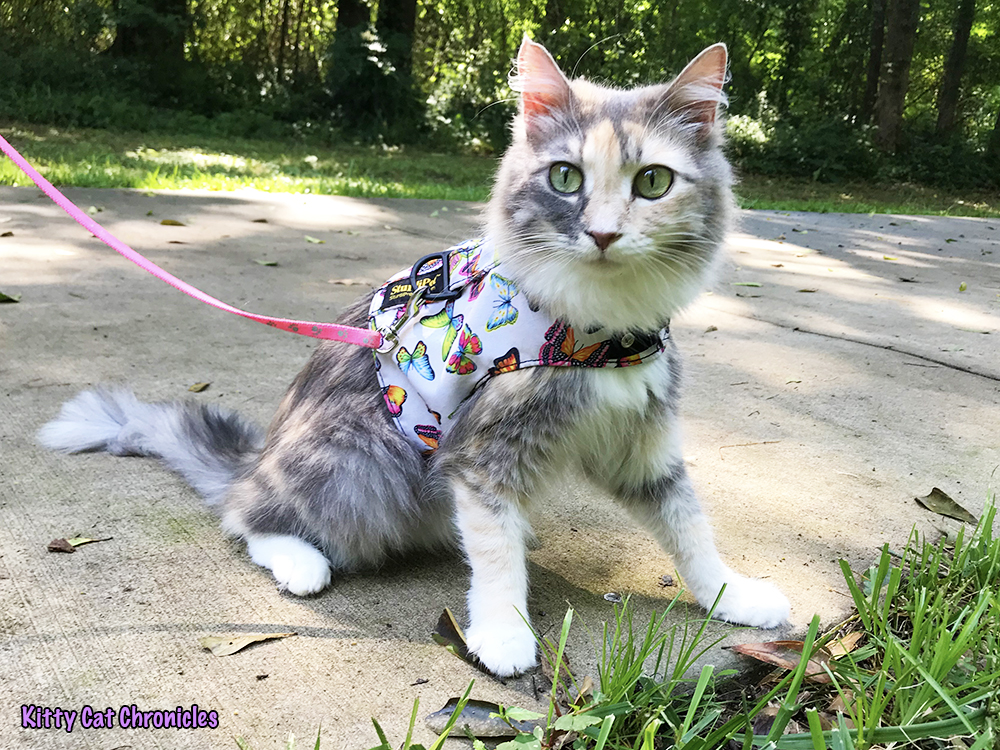 5. Taking cats with CH out on adventures helps their confidence to soar!

When it comes to special-needs animals, some people have a natural tendency to want to shield and protect them from everything. There is absolutely nothing wrong with wanting to keep your cat from harm, but it is my opinion that sometimes this tendency can go too far. This was a lesson I had to learn myself when we first adopted Sophie. For her own safety and well-being, I wanted to keep her off the furniture and help her do everything. I eventually realized that I was doing her a disservice by babying her so much, as it prevented her from figuring things out for herself. I don’t really help Sophie with much at all anymore, and you know what? She doesn’t need it.

When we first adopted Sophie, she wouldn’t jump. At all. We had to help her up onto the furniture. She also wouldn’t use the litter box on her own. Whenever she had to go to the bathroom, she would meow wildly until we followed her in and held her up as she went potty. Now, Sophie jumps up onto our bed by herself (and our bed is not low to the ground). Sure, she misses her mark sometimes, but she nails it a lot of the time! She also uses the bathroom on her own. She runs around the house like a crazy cat, despite our hardwood flooring. She can seriously do anything, with the exception of getting up on the kitchen counters (I’m still waiting on that to happen… ;). Her independence has caused her confidence levels to soar.

I think taking Sophie out on adventures has also contributed to her confidence levels. Having the opportunity to run around outside, explore different places, meet new people and animals – it has all helped to expand Sophie’s comfort zone, which in turn has helped build her confidence. On our park outing last weekend, Sophie had the best time chasing butterflies and just running through the grass. She was confident, care-free, and 100% happy. These things can do wonders for a CH cat’s abilities. I’ve seen it with my own eyes. 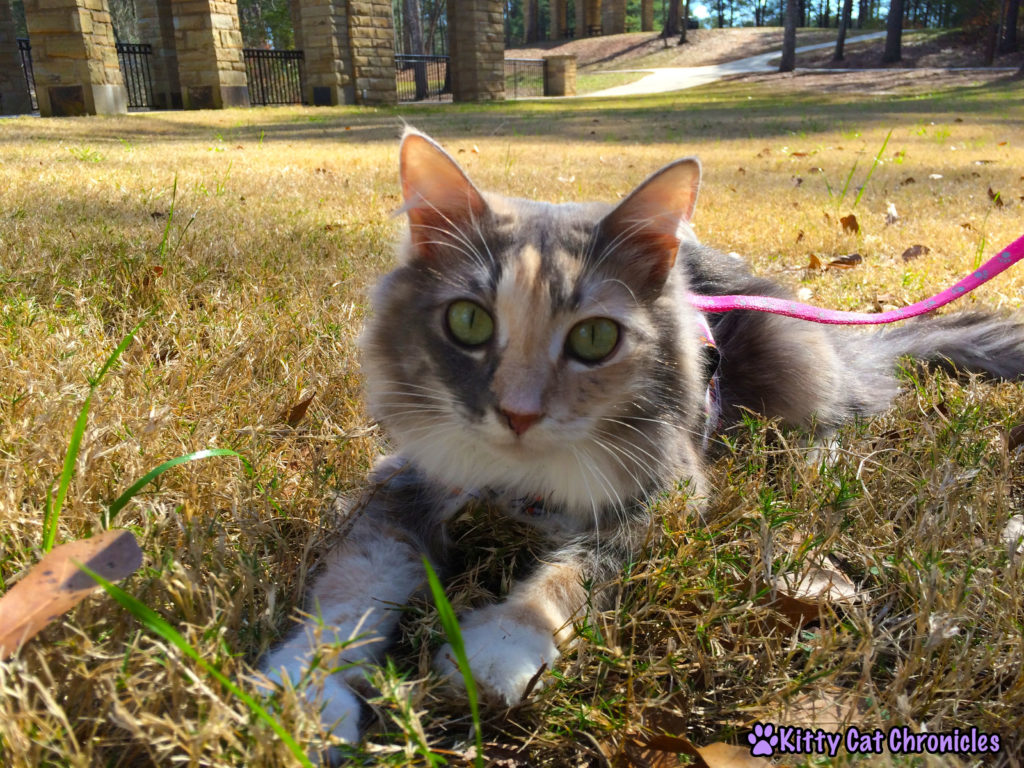 So if you’re looking for an adventure cat companion who will be happy just going to the park (or even just playing in your yard or riding in a stroller), who will teach you the value of determination, who will expand your heart a million times, and who will teach you more about love and acceptance than you ever thought they could… consider adopting a cat with cerebellar hypoplasia. You won’t be disappointed! In fact, they will exceed your expectations – guaranteed.