Yesterday marked the third anniversary of the day Kylo Ren joined our family. We don’t know his actual birthday, so we celebrate it on February 14th. For those who don’t know the story, Kylo was a surprise Valentine’s Day gift from my husband. I had been visiting a friend for the weekend and came home that Sunday afternoon to find a rambunctious kitten running all over the house. Best Valentine’s Day ever.

Bobby had gone to the store to pick out a Valentine’s Day card for me. He was trying to find a card that had a cat on it when he thought to himself, “Hmm… I think I’ll just get her an actual cat instead!” So off he went to PetSmart, which is where our favorite local rescue holds adoption events on the weekend. He was specifically looking for Kylo Ren (whose name was Ash at the time, I think…) because a couple of weeks earlier after visiting PetSmart I had mentioned meeting a crazy black kitten who was terrorizing the other cats. The thought hadn’t even crossed my mind about actually adopting him, as we already had 5 cats. He had just made an impression on me because he was so wild and hilarious.

Bobby remembered me mentioning him and went to PetSmart to find him. Thankfully he hadn’t been adopted yet. Bobby brought him home, and when I walked in the door I couldn’t believe my eyes.

Three years later, Kylo is still a wild thing who loves to instigate trouble and terrorize his brothers and sisters. He hasn’t grown out of that playful kitten personality, and I’m thinking (and hoping) he never will. He happens to be on the small side too (weighing just under 6 pounds), so I call him my “forever baby.” 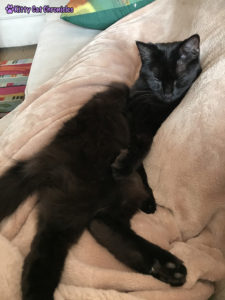 Despite his wildness, he is a super sweet boy and LOVES snuggles. He follows me around the house, and as soon as I sit down somewhere, he is in my lap.

We will be celebrating Kylo’s big day this weekend with an adventure (weather permitting) and a nip party. Can’t wait! 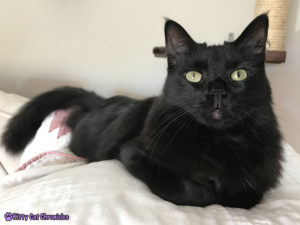