Hide Search
You are here: Home / Memorials for Past Cats / Run Free, Lucy: A Tribute to the Best Dog We Could Have Ever Asked For

Lucy joined my family during the summer of 2000, when I was just 11 years old. I remember the day my stepmom, Sherry, brought her home. She was such a cute little puppy – all head and all butt, as my brother described her. From day one, Lucy showed us what an independent and spunky girl she was. 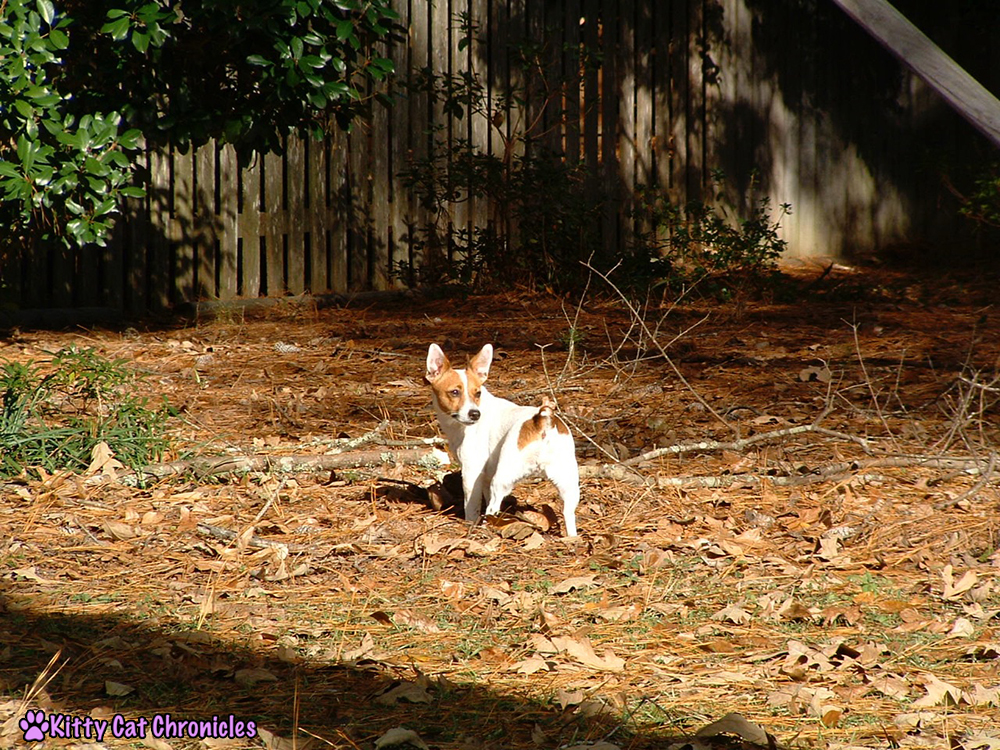 She was also fearless. One of the craziest Lucy stories would be the time she killed a snake. I wasn’t there to see it, but Sherry said that she found Lucy in the backyard covered in blood. She immediately thought Lucy had hurt herself and checked her over for wounds. When she didn’t find any, she was confused… until Lucy went back out into the yard and returned with a dead snake hanging from her mouth. 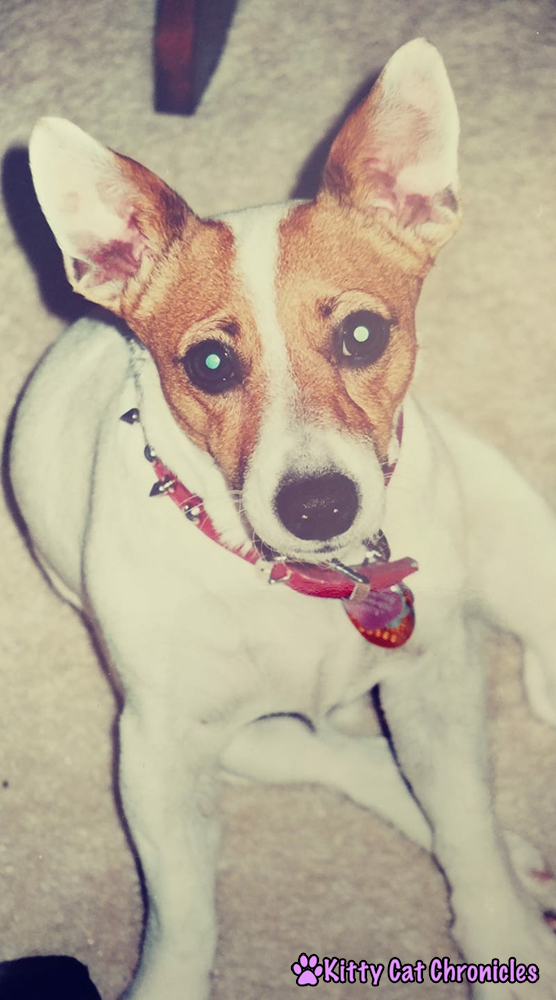 Over the years, my family had a handful of other dogs in addition to Lucy. No matter their sizes, Lucy always made sure they knew she was the boss. This wasn’t a problem until just a few years ago. Unfortunately, Grace, one of my dad and Sherry’s other dogs, eventually got tired of being bossed around by little Lucy, so she started trying to dominate Lucy. Because Grace was much larger, the confrontations didn’t go very well for Lucy. For Lucy’s own protection and safety, my parents asked Bobby and me if we would be willing to take her into our home so she could safely live out her golden years. She officially joined our family on December 24, 2015.

While I was sorry to hear that Lucy and Grace weren’t getting along, I can’t say that I’m sorry we had to take Lucy in. We were unsure of how things would go at first because Lucy had never been around cats before, but we quickly saw that wasn’t going to be a problem. Lucy assimilated into our family with no issues. Within no time, she was just “one of the cats,” and I couldn’t imagine our family without her.

As I said, Lucy got along with the cats very well. She loved running back and forth down the hallway with them when they had the “zoomies.” She also loved to be right in the middle of things when they were playing. She was never quite sure how to play with them though. Whenever Bobby and I would play STICK with the cats, Lucy would be right in the middle of the game, just sitting there. The cats would be running around, even leaping up into the air and sometimes landing right on top of Lucy. I would try to move her out of the line of fire, but she would just move right back into the middle of the game and sit. She loved it. 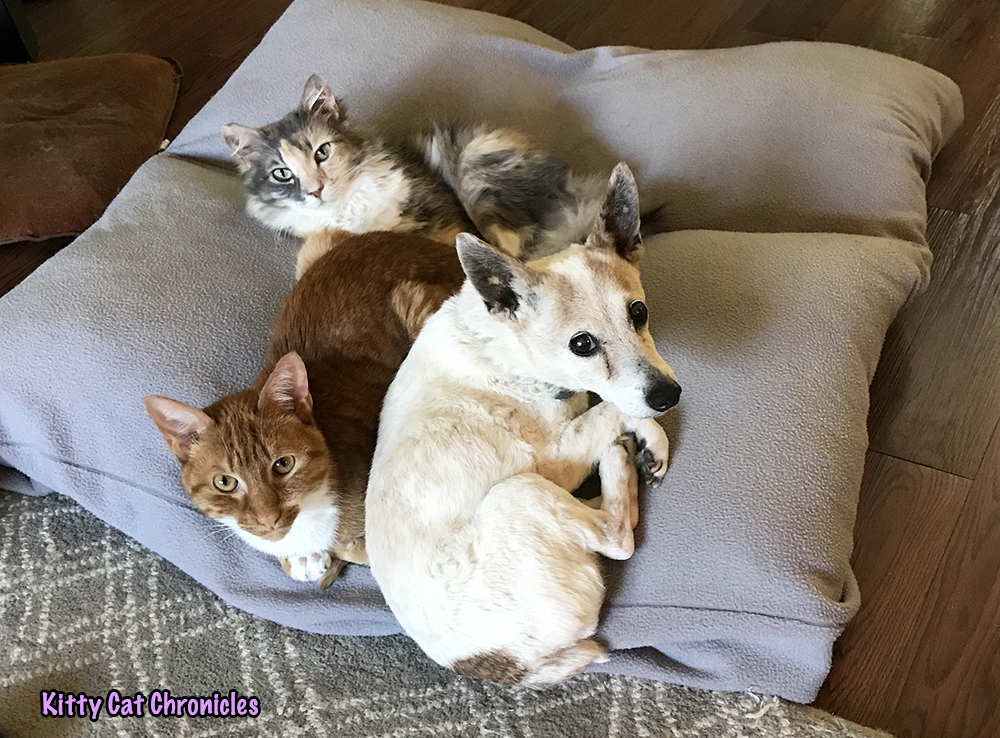 Lucy was also incredibly intelligent. She lost her hearing quite a few years ago, but she quickly learned our family’s made-up hand signals for her. She also figured out that I would give her treats every time she came inside from going to the bathroom. She would sometimes ask to be let outside, only to immediately ask to come back in… so she could get her treats. I always obliged. I figured she was already 16, 17, 18 years old, so why not give her anything she wanted.

One of Lucy’s favorite things was sitting on the end table in our living room. It gave her the best vantage point to see out the front window and observe people coming and going. Bobby and I teach music lessons out of our home, so there is always a steady stream of people coming in and out of our house all afternoon. She would sit on the table and bark whenever someone pulled up. Then she would jump down, run to the front door to greet the new arrival, and then run back to her snoopervising spot to wait for the next person.

Right up until the end, Lucy was always up for an adventure. Whether it was taking a stroll through the park with one or two of our adventure cats or going for a boat ride down the St. John’s River, Lucy was game. If there was even a small chance of adventure, Lucy wanted in. In fact, it was just a few weeks ago that she went for a swim at Silver Glen Springs while we were visiting Bobby’s parents in Florida. Little did I know that would be her last adventure. 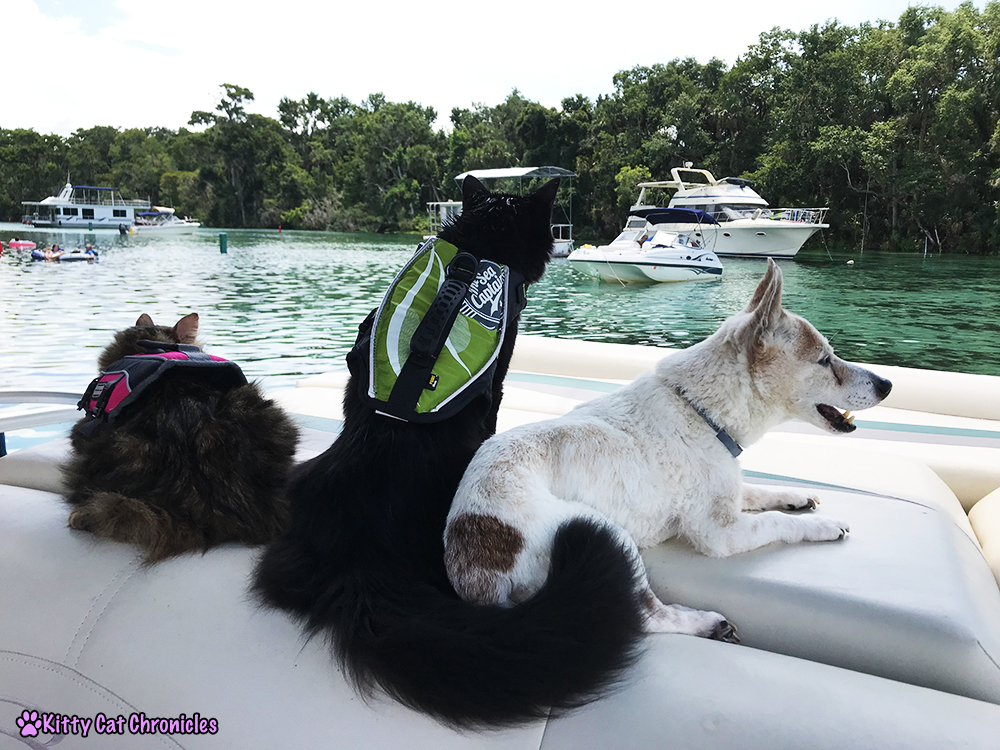 This past Friday was the day we had to say our final goodbyes to Lucy. It was hands-down one of the hardest days I’ve ever experienced. I’ve lost pets before, but this was the first time I had to be the one to make the decision to help one cross over the rainbow bridge. It was not an easy decision to make, to say the least. Even though I know it was the right thing to do and that Lucy’s time had come, I’m still having a difficult time accepting that.

Even within the 2.5 years that Bobby and I had Lucy, there were a handful of times that she had gotten sick and we thought the end might be near. However, she always bounced back and made a full recovery. She was like the Energizer bunny. So much so that I would often say that I thought Lucy was immortal. My dad even made the joke just recently that we should start grooming the next family generation to care for Lucy because she was going to outlive us all. 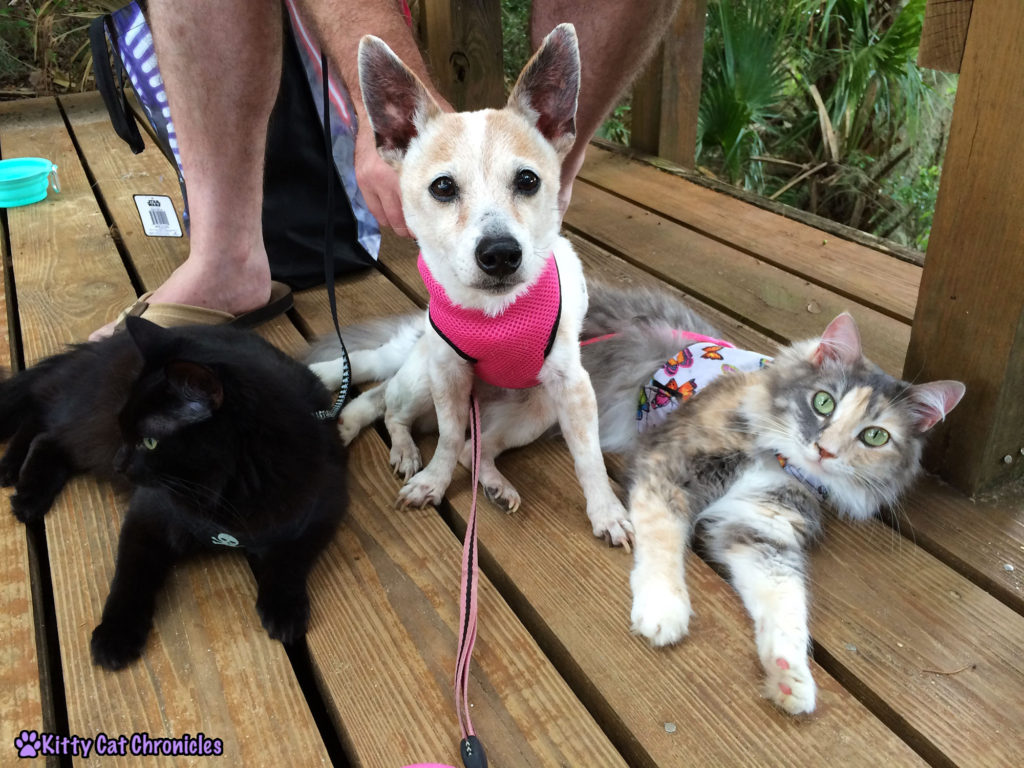 Because of Lucy’s propensity to recover from everything, when she developed a herniated disk early last week and lost control of one of her back legs, we thought she might be able to heal and recover from it. After a day of bed rest and anti-inflammatory medication from our vet, she appeared to improve greatly. However, late Thursday night she regressed and lost control of both back legs. It became clear that Lucy’s body had finally given out, and it was time for her to cross over the Rainbow Bridge. 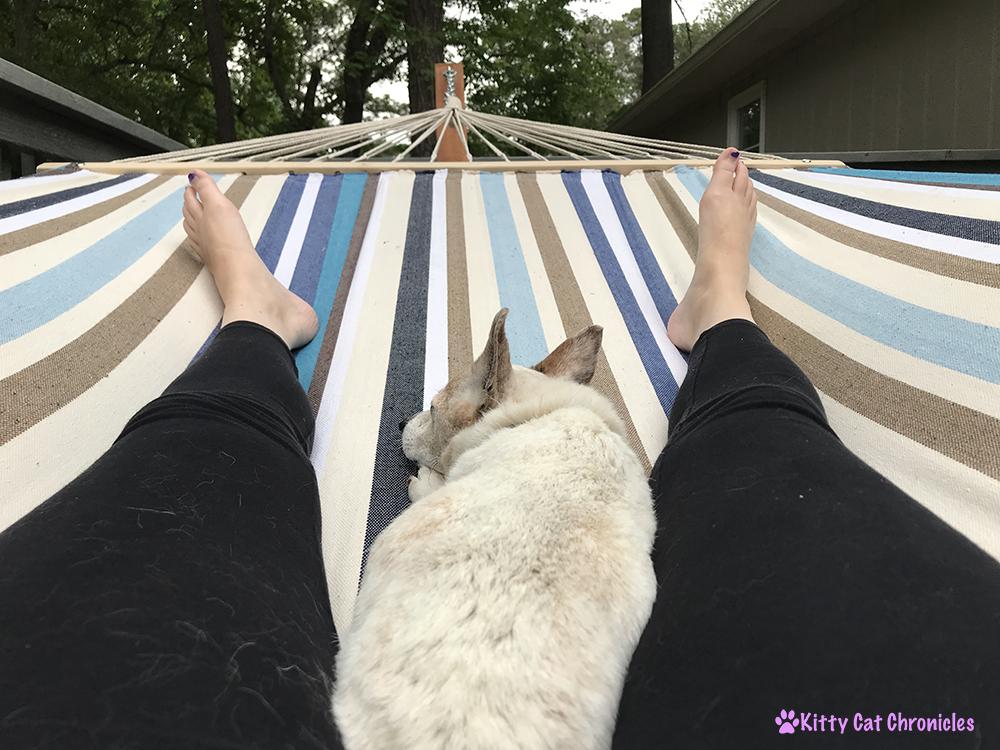 Sherry came down from Atlanta, and the three of us spent a final morning with Lucy before taking her to the vet to say our goodbyes. We loved on her and shared fond memories as we watched Lucy gobble down a delicious final feast. Lucy suffered from chronic pancreatitis for several years, so she was on a very strict diet. She couldn’t eat anything outside of her low-fat, bland diet. But on Friday morning, she enjoyed a plate full of scrambled eggs, another plate full of hamburger meat, and two plates full of cheddar cheese. I’ve never seen her eat so much and so quickly in all my life! 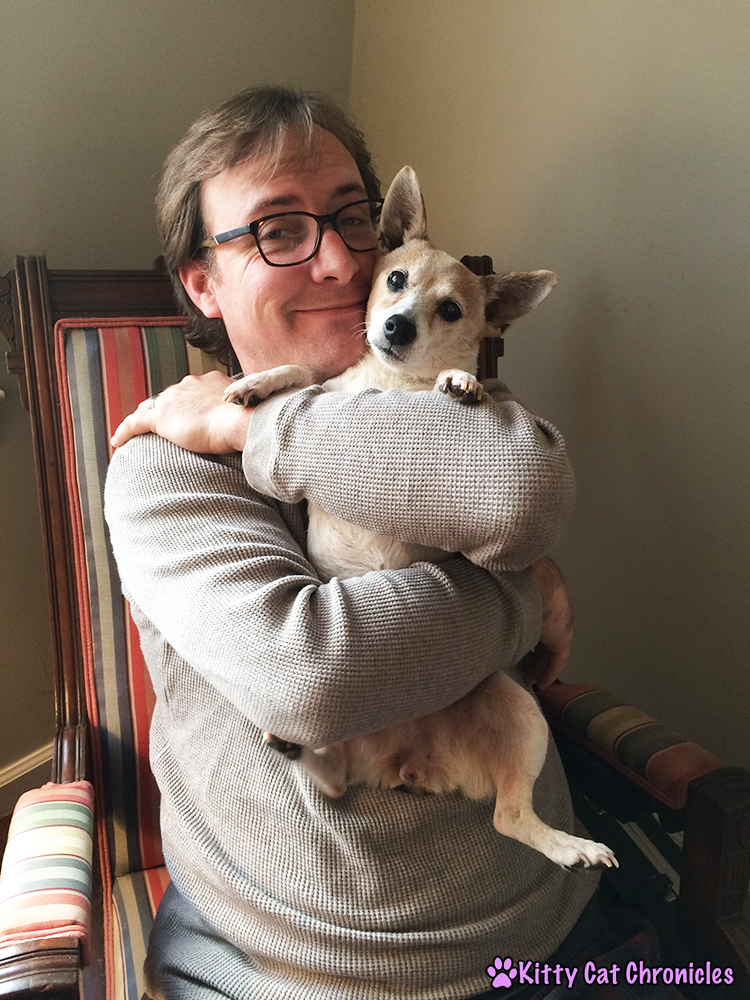 After our vet helped Lucy to cross over the Rainbow Bridge, we brought her home and laid her to rest in our back yard beside Milton. Yesterday, Bobby and I created a mulched flower bed out of the area and plated three azalea bushes, one of which marks Lucy’s final resting place. We plan to add flowers and other plants to the bed as time goes by. While it certainly doesn’t lessen the pain of losing Lucy, creating the memorial garden served as a wonderful way to channel our grief into something productive. 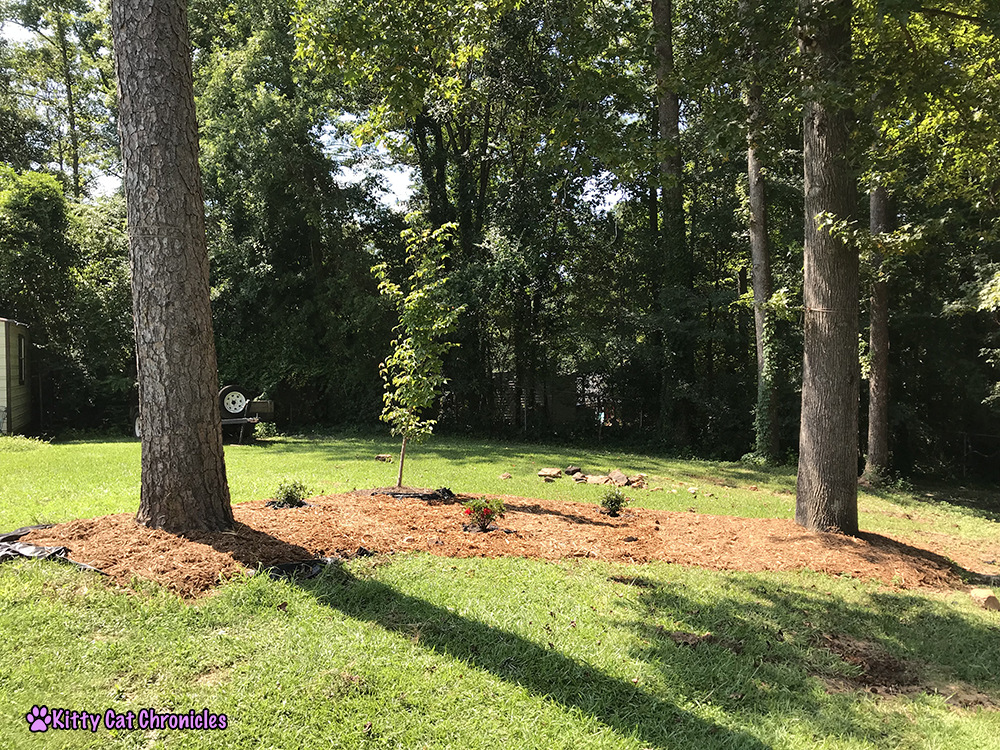 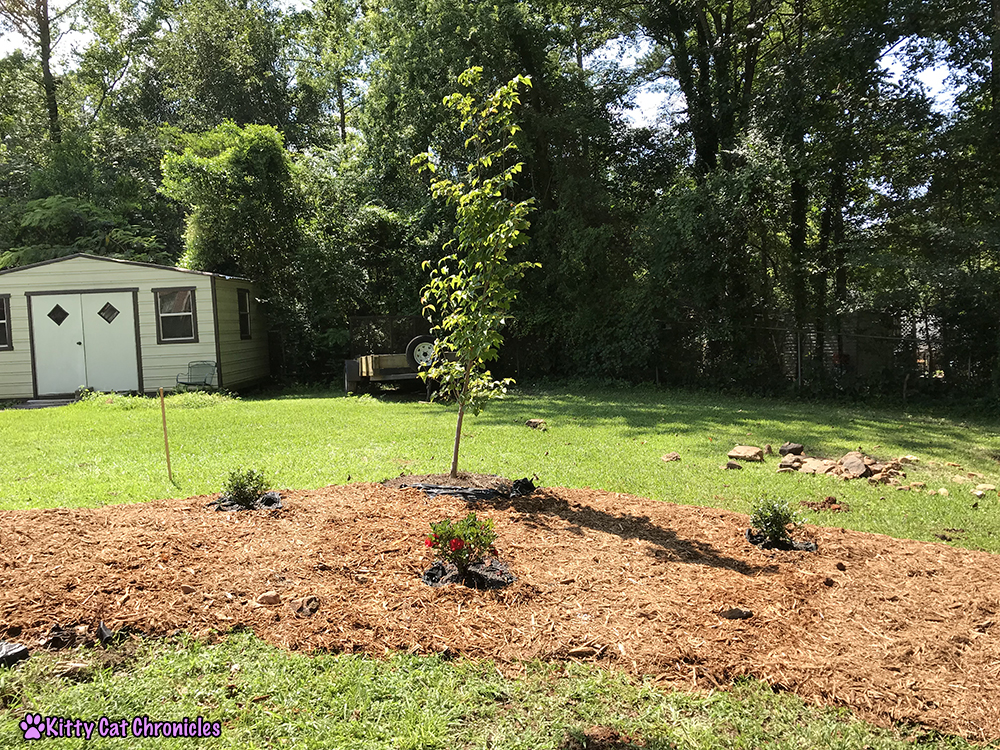 I don’t know how long it will take to adjust to life without Lucy. She was my constant shadow, never wanting to be alone, always following me from room to room. It’s heartbreaking to look over at her favorite napping places and see them empty. To have one less bowl to fill at meal times. To come home and not have to let her outside. To not be able to give her belly rubs or treats. And I haven’t even thought about taking anyone out for an adventure. It just won’t be the same without Lucy.

I am grateful for the years we had with her though. 18+ years is one heck of a lifetime. 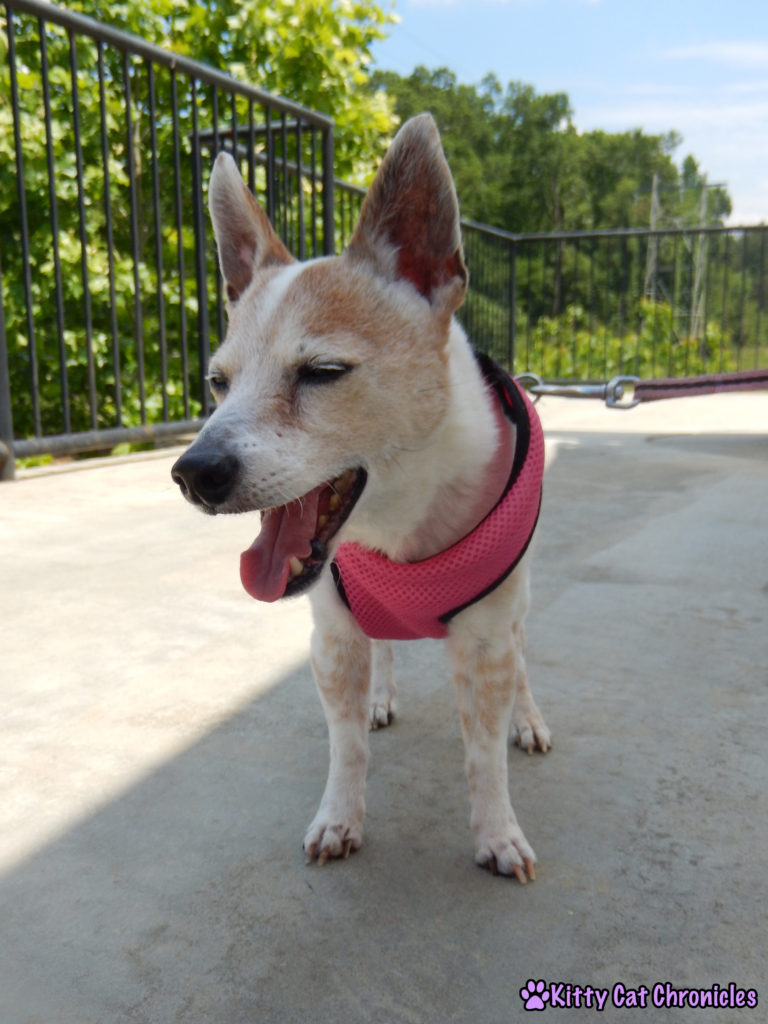 Thank you, Lucy, for all of the love you shared with us over the years. You will be forever missed. I love you. Always.