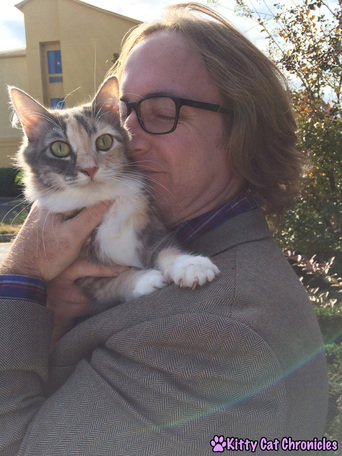 About a month ago, my husband and I went to the Atlanta Pet Expo, and we took Sophie with us! I had had this day marked on my calendar for a few months and was so looking forward to it. When the Big Day arrived, I could hardly contain my excitement. I couldn’t wait to visit all of the vendors and exhibit booths, hopefully make some connections for my blog, of course rack in some free stuff, and most of all see how Sophie would do.

Inside the Atlanta Pet Expo

I had never been to a Pet Expo before, so I wasn’t quite sure of what to expect. What should you expect at a Pet Expo, you ask? DOGS! Dogs everywhere! I was a little bit worried at first. Sophie doesn’t mind dogs, but I didn’t know how the dogs would react to her. I guess because she was in her pocket above eye level of most of the dogs, none of them really even noticed her. I suppose too that people would only bring their dog if they were well-behaved (hopefully). 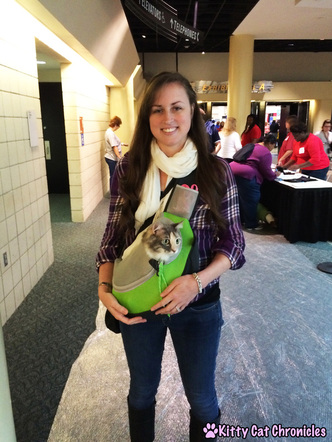 When we signed in at the registration table, the employees were so excited to see a cat. They said it was the first cat of the day. Truthfully, she was the ONLY cat of the day. The only other cats I saw the entire time were the ones that were there for adoption. Sophie was the only guest-cat 🙂

We had a great time too. I was disappointed that most every vendor and exhibitor was dog-related. There wasn’t much cat stuff there at all. It was still a good time though. Sophie did so amazingly well – better than I even expected. We were there for 2+ hours, and she just hung out in her pocket the whole time, didn’t even complain one bit. She is such a ham, so of course she loved all of the attention she got from strangers. So many people wanted to pet her, hold her in her pocket, and even have their picture taken with her. Sophie, the Celebri-Cat!

There was one booth for Cooper’s Cupboard, which is non-profil food pantry. They help pets stay with their families by providing temporary food assistance. How cool is that?! Anyway, they had homemade catnip toys for $1. Sophie of course had to have one. Here is a picture of her picking out her toy:

She also made some new friends! 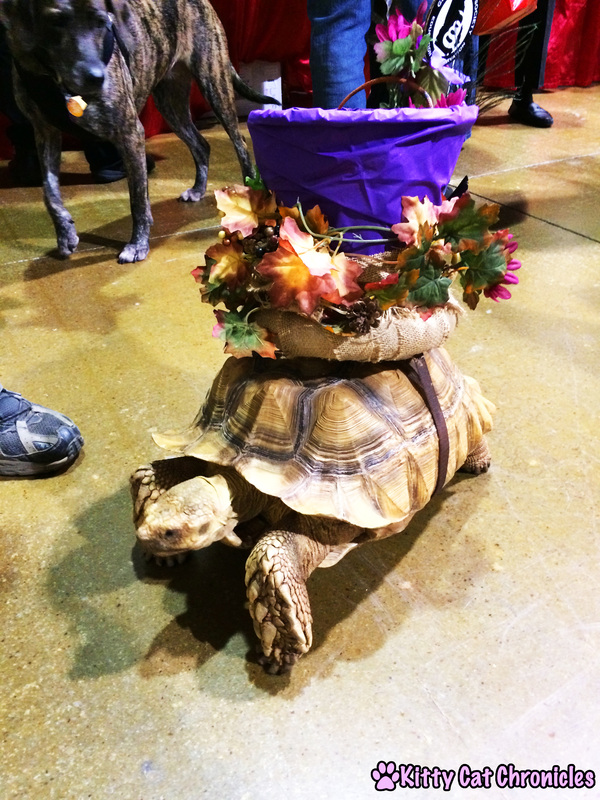 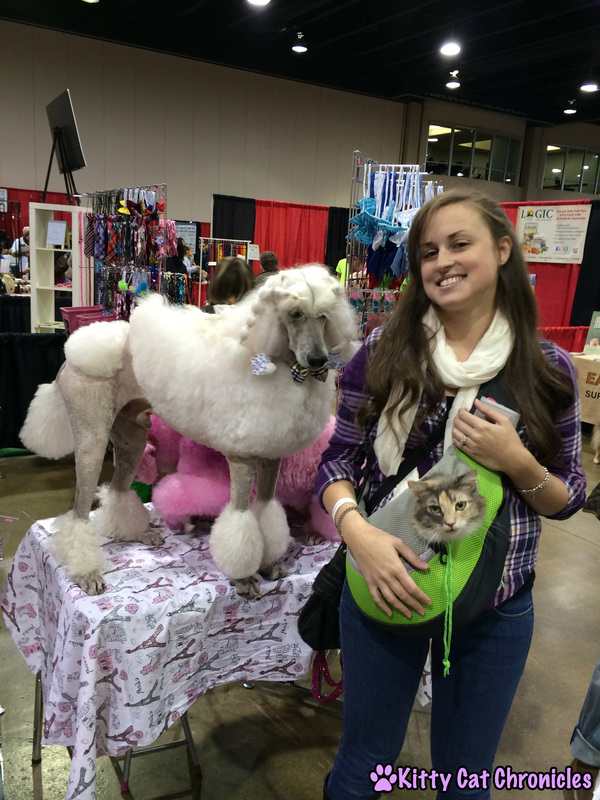 And she got to have her photo made for Pet Pages Atlanta!
(That isn’t a real cover photo. It was just for fun.) 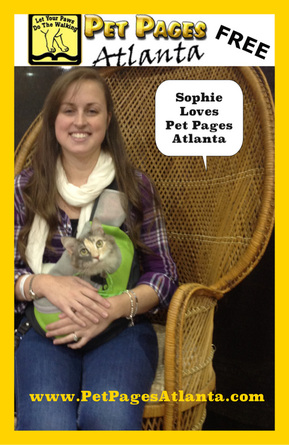 There was a booth that had low-cost vaccinations and microchipping, so we were able to get Sophie microchipped too. It was only $25, versus the $60 it costs at the vet. There was a long wait for it though, so after we put our names on the wait list, we went and did some exploring. We found an area of the convention center that was empty, so we let Sophie out of her pocket. 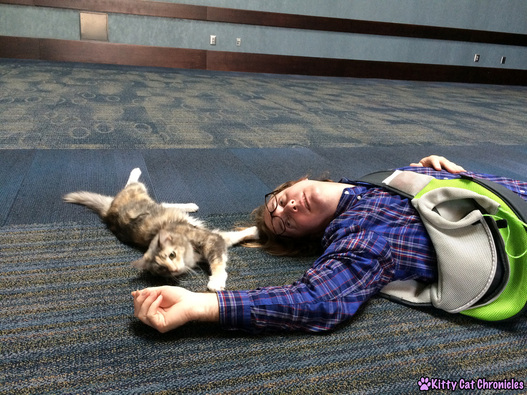 One of the biggest highlights of the day was Sophie participating in the Lure Chase. One of the vendors sold Lure Chases for dogs, and they had one on exhibit that you could let your pet test. For a $10 donation to a local animal rescue, your pet could go in the Lure Chase ring and get worn out chasing a lure that went around and around. Sophie LOVED it. Dog after dog after dog went in the lure chase ring, and she couldn’t take her eyes off it. It looked more like a giant cat toy than a dog toy!!! 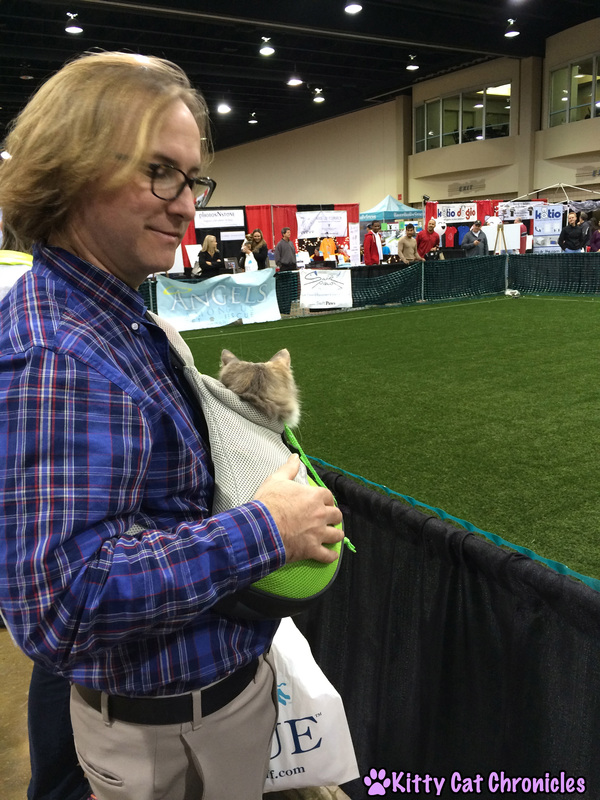 We decided she might like to give it a go, so we went to the booth to sign her up! The guy laughed at first and said that he had never had a cat try it before, but that she could if she wanted to.

I was nervous about letting her do it at first. There was a pretty big crowd of spectators, and I knew that as soon as she took a step inside that ring people would comment about her funny walk. Usually people’s first reaction to seeing her is something like, “Awww poor cat” or “What’s wrong with her?” I didn’t feel like dealing with people’s negativity, but then I realized that it might be a good opportunity to educate someone and show them that kitties like Sophie are truly awesome! So in she went…

It didn’t go quite like we thought it would. She was so into watching that lure when the dogs were chasing it that we thought for sure she would go nuts chasing it too. But she just preferred to sit and watch it go by. Even though she didn’t chase the lure, she seemed to have fun anyway.

Overall, the day was a huge success. Tons of dogs, lots of loud noises, a huge crowd of people, a lure chase, and a microchipping later, Sophie remained unfazed. I’ve never met a cat like her. She isn’t scared of anything, and she’s always up for all kinds of adventures. I can’t wait to take her to BlogPaws with me in May. We are going to have one heck of a good time.