If you read our post from last week, The Talon Scratch Mystery, then you know that we seem to have a wild beast running loose in our house. Let us recap…

SOMEONE has been leaving these talon marks on all of the door frames and columns in the house. Who could it possibly be?! All of the kitties have been questioned, but they are all pleading the 5th. 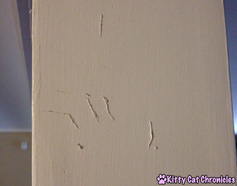 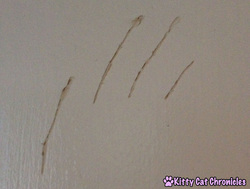 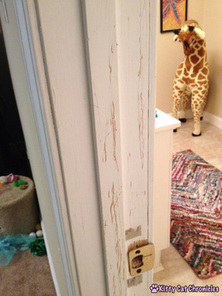 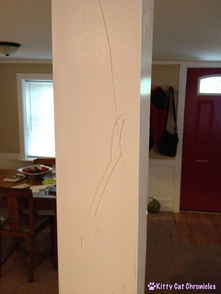 We reached out to our blogging friends, as we have in the past, for any information or insights into this troubling case. The kitties seem to have covered their tracks well though, as no one was able to uncover who is leaving these marks behind.

Just when we were thinking the case would remain unsolved, we received this interesting video footage… 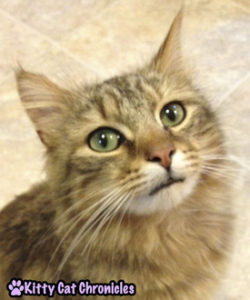 One of his favorite pastimes is running around the house at full speed and leaping up the door frames and sliding down them like a fireman on a fire pole. Sometimes he waits a while before he slides down – I’ve seen him hold himself up at the top of the door frame for about 15 seconds before sliding down. This activity is usually accompanied by all kinds of squeaks and meows. It’s pretty hilarious. I’ve been trying to catch it on video for a while, but he’s just too quick! I was so excited when I finally caught it!

We lovingly refer to Caster as our “Brutus” or “Mudgeon” (short for curmudgeon). He is all speed and brute strength. He likes to body slam closed doors, rough house like you wouldn’t believe, and wrestle anything and everything that moves (including me and my husband). He frequently gets on his fursiblings’ nerves by initiating wrestling matches and chasing them around the house when they aren’t in the mood. But underneath this wild and raucous behavior is a sweet, sweet, lover boy – though he will never admit it. While he does cuddle with Sophie (they are best friends), he does not like to cuddle with me or my husband in broad daylight. Only in the cover of darkness (and our assumed sleep) will he cuddle with us. I sometimes wake up in the middle of the night and he is curled up between us, purring. It melts my heart every time. He is progressing though – he has recently started sneaking up on the couch and snuggling with us while he purrs and suckles on our fleecy blankets. Pretty soon he will be a big, cuddly lap cat like the others!

We’ve had Caster almost 6 months now – it was mid-January when I found him in the woods behind our apartment building, crying and obviously lost. As soon as he laid eyes on me, he ran and leaped into my arms – a moment I will never forget. Though I did try to find his family, I was unsuccessful. I have no idea where he came from or what his past story is, but I am thankful every day that I found my Mudgeon. He brings so many laughs (and face-palms 😉 to our lives.