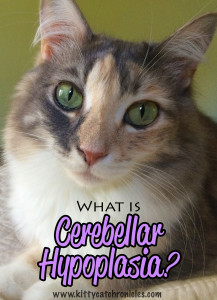 Cerebellar hypoplasia (CH) is a disorder in which the cerebellum part of the brain doesn’t develop completely before birth. The cerebellum is a region of the brain that plays a major role in motor control and coordination. Having an underdeveloped cerebellum results in jerky movements, uncoordinated motion, and tremors. Though there are varying degrees of severity, a cat affected by CH is generally wobbly and unsteady and will often fall over when walking – hence the nickname “Wobbly Cat Syndrome.” As my husband puts it, Sophie looks like she has gotten into the liquor cabinet a few too many times. 😉

As mentioned, there are varying degrees of cerebellar hypoplasia, ranging from mild to severe cases. Cats with mild cases of CH may have a little wobble to their step or possibly slight head tremors but can generally get around with no issues. Cats with severe CH usually can’t walk on their own and have to have specially-made litter boxes.

How is cerebellar hypoplasia diagnosed?

CH is a disorder that is present at birth, but because kittens’ movements aren’t all that coordinated in the beginning, it is sometimes not noticeable until a month or two after birth. A CT scan or MRI is the only way to officially diagnose CH, but most vets are familiar enough with the symptoms that they can diagnose the disorder without these tests. There are other diseases and disorders out there that resemble CH though, so it is important to understand the differences so that your pet receives the appropriate care and attention needed.

There are several factors that can cause the disorder. One of the most common causes is the feline panleukopenia virus. If a mother cat contracts panleukopenia while pregnant, her kittens may develop CH while in the womb. Other causes include malnutrition, poisoning, or trauma while in utero. I will stress that all of these causes are things that occur while the kittens are in the womb. A cat cannot contract or develop CH later in life. 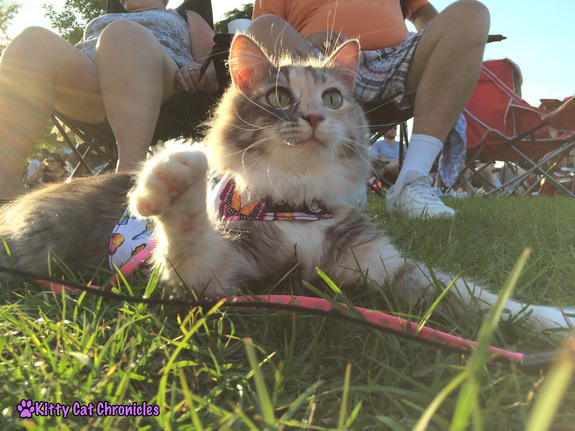 What is the treatment for cerebellar hypoplasia?

There is no treatment for cerebellar hypoplasia, and it does not get better or worse with age. However, a cat can learn to compensate for it and can therefore appear to improve. Sophie has learned to compensate for her CH in so many ways, it’s quite amazing. She is not the most coordinated jumper, so she has become an incredible climber. She can scale any obstacle put in her way. And because we play with her so much and encourage her to run and chase, she has built up muscle strength in her legs, which helps her to run faster and play even better! Over time, Sophie has actually learned to hone her jumping skills and can now jump up onto our bed. Though I will say that her landings aren’t always the most graceful…

It has also been found that hydrotherapy can be helpful in building up muscle strength in those cats who have more severe cases of CH. So while there is no cure or official medical treatment that will cure CH, there are many things you can do for your CH kitty that are extremely beneficial to them and their independence, like playing and encouraging them to accomplish things on their own.​

Will my cat’s lifespan be affected?

A common misconception about CH cats is that their lifespan will be affected by the disorder. This is not true. CH does not affect the lifespan of a cat, and it does not cause any other types of complications. That being said, because of CH kitties’ wobbly natures and tendency to fall, they may hurt themselves and require extra veterinary care to treat injuries. Chipped teeth are quite common among CH cats. Thankfully we haven’t had to deal with any of those with Sophie. Actually, she has never had to be treated for any type of injury, though I am sometimes amazed that she hasn’t hurt herself after all of the tumbles and falls she has had.

Can my CH cat live a happy life?

ABSOLUTELY! Because CH kitties are born the way they are, they don’t know any different. As long as they are well taken care of like any other pet, they can live long and happy lives. Sophie doesn’t let her disability get in the way of anything. She’s never faced an obstacle she can’t tackle, and she always has the most positive attitude. She is by far one of the happiest cats I’ve ever met. From what I’ve heard from other CH cat parents, this is how CH kitties are across the board.

Sophie may stumble and fall, hit her head sometimes, or completely miss her mark when trying to jump, but she gets right back up and keeps on going with a big smile on her face. I think we can all learn a little something from cats like Sophie…