Hide Search
You are here: Home / Holidays with Cats / And the Winner of the 7th Annual KCC Easter Egg Hunt Is…

Yesterday, the KCC Gang competed in our favorite event of the year… the KCC Easter Egg Hunt! Our egg hunt is a long-standing tradition. We had the first one back in 2013, when Delilah, Sampson, and Sophie were the only competitors. We hid maybe 15-20 eggs that year. Now, we have seven competitors and hid 60 eggs this year, plus the Grand Prize Egg! 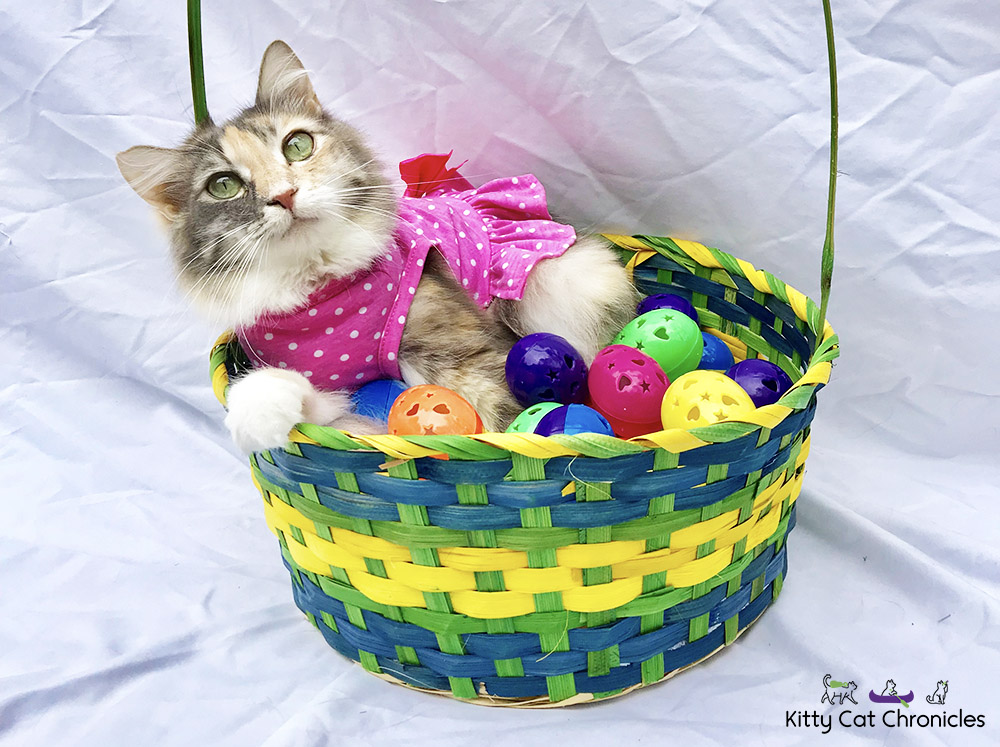 As usual, we took to our blog and social media channels to see who YOU thought would win this year. Here is the vote tally…

Sophie had the most votes, though I think that might be because she is the “most popular” kitty of the group. Though Sophie is super adorable and great at posing for Easter photos, she is a lousy hunter. Sampson was the obvious choice to win, seeing as he has won 5 of the 6 previous egg hunts.

Okay, enough of the analysis… let’s get to the action!

Sassy went first, with her own private egg hunt. We hid 10 eggs for her. She found 1 or 2 on her own, but we mostly had to assist her in finding them. She still had a good time though!

After Sassy completed her hunt, we reset the “arena” (aka living room) with 60 eggs and a Grand Prize Egg. Things started off strong, with Sampson leading the pack out of the bedroom and into the arena. He immediately took to the hunt. Delilah and Caster followed suit.

Kylo Ren quickly figured out that he didn’t need to put any effort into finding any eggs on his own — if he just followed Sampson around, he could partake in Sampy’s treat winnings each time Sampy found an egg.

Sophie had zero interest in the hunt, as usual. She mostly sat on the sidelines, found interest in random toys she found in the room, or licked the Sleepypods (?????).

Raddy is a nervous and skittish boy, so the excitement and high energy of the hunt was a little much for him. He did emerge a few times though and participated a bit.

Sampson took the lead immediately. He sniffed out eggs faster than I could keep up with. Unfortunately, he sniffed out eggs more quickly than he could handle himself too, and about halfway through the hunt, he threw up. He lost interest after that and joined Sophie on the sidelines.

After Sampson excused himself from the festivities, the energy of the hunt died down quite a bit. Delilah and Caster continued hunting, but the action happened at a much slower pace.

Kylo Ren did find the Grand Prize Egg though — that was exciting!

Alright, alright, let’s get to the results… and the winner of the 7th Annual KCC Easter Egg Hunt is…

Way to go, Sampy! Despite the fact that he got sick from eating too many treats too quickly and sat out the last half of the hunt, he still won. He really is an amazing egg hunter. It’s so much fun to watch too. Well deserved, Sampy! 😀

Honorable mention goes to Caster. I was really afraid that Caster wasn’t going to do well this year, with all of his health issues and vision impairment. But he didn’t let his bad vision get in his way. He sniffed those eggs out like a champ and came in second place!

The award for Most Improved goes to Sophie. Though she isn’t any good at the egg hunt, she did find one! Her first egg find in 4 years! 😀

Here is some video footage of the hunt. I will admit though that a lot of it is of Caster. I was rooting for him so hard and pretty much followed him around and cheered him on the whole time. <3

Another memorable egg hunt in the books! I’m already excited for next year…