Disclosure: This post is sponsored by ToniLoTempio. We received a copy of Meow If It’s Murder in exchange for our honest review, but this did not influence our opinions at all. We only share information we feel is relevant to our readers. Toni LoTempio is not responsible for the content of this post.

It’s that time of year – the time when it’s cold outside, and all you’d like to do is curl up on the couch next to the fireplace with a warm blanket, a cup of hot chocolate, a cat (or five), and a good book. At least that’s how I feel! And just recently, I had the pleasure of reading a book that was purrfect for that activity – Meow If It’s Murder by Toni LoTempio. 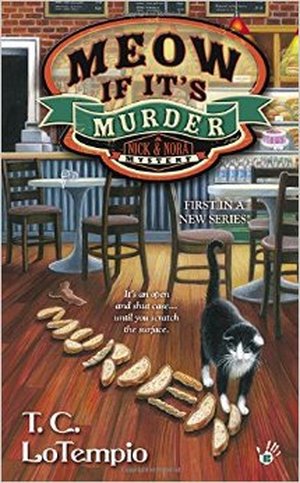 Nora Charles doesn’t believe in fate, even if she is a crime reporter who shares a name with a character from The Thin Man. In fact, she’s moving back to Cruz, California, to have a quieter life. But after finding an online magazine eager for material, and a stray cat named Nick with a talent for detection, Nora’s not just reporting crimes again. She’s uncovering them…

Back in her hometown, Nora reconnects with old friends and makes some new ones, like Nick, the charming feline who seems determined to be her cat. But not everything about Cruz is friendly. Writing for a local online magazine, Nora investigates the curious death of socialite Lola Grainger. Though it was deemed an accident, Nora suspects foul play. And it seems that her cat does too.

Apparently, Nick used to belong to a P.I. who disappeared while investigating Lola Grainger’s death. The coincidence is spooky, but not as spooky as the clues Nick spells out for her with Scrabble letters—clues that lead her down an increasingly dangerous path. Whether fate put her on this case or not, solving it will take all of Nora’s wits, and maybe a few of Nick’s nine lives.

A murder mystery, this book had everything that I could have hoped it would have – intrigue, suspense, a little comedy, even a bit of romance, and yes, a cat! Right from the start, the story had me hooked. All of the characters were likable (at least the ones you are supposed to like ;), and I found myself really caring for and rooting for Nora. And the fact that her partner in crime-solving was a cat (a handsome tuxie cat no less) made it all the more enjoyable. As for the mystery of who killed Lola Grainger, I was left guessing the entire time. I love mysteries and whodunits, and this book didn’t disappoint. It was just plain fun!

Oh, and the best part — Meow If It’s Murder is the first in a series! So there will be MORE Nick and Nora stories. This one left me wanting more, so I’m glad to know the Nick and Nora saga will continue.

Now, not only did we have the pleasure of reading and reviewing Meow If It’s Murder, we also got to interview the author, Toni! How cool is that!

Welcome, Toni! We are so excited to have you join us today. Please start by telling us a little bit about yourself.
Thank you for having me!  Well, I was born in New York City and grew up in New Jersey, and I’ve been a mystery fan ever since I read my first Nancy Drew mystery (The Secret in the Old Attic).  I love watching reruns of Murder she Wrote and I’m especially fond of CASTLE – especially since ROCCO and I do fundraising for a charity he was involved with founding, KIDS NEED TO READ.  I also love anything paranormal – big Buffy fan and also Dark Shadows.  And I’m an animal lover (I guess that goes without saying, right?) I am also the suspense columnist and mystery reviewer for Night Owl Digital Magazine.   So when I’m not writing I’m reading!
Folks can find out about what I and ROCCO are working on now by visiting either ROCCO’s blog, www.catsbooksmorecats.blogspot.com, or my author website, www.tclotempio.com. ROCCO interviews authors and hosts giveaways at least twice a month.

You are primarily a mystery/suspense writer. Have you ever dabbled in writing other genres?
Hells yes!   I started out writing horror ala Stephen King until I was told it was a “soft” market.  I’ve self published a few paranormal suspense novels, but I think I’ve found my niche with cozies – at least that’s what ROCCO tells me LOL.

Meow if It’s Murder is the first in a new series. Do you already have an idea of how the entire series is going to go, or are you just taking it one book at a time?
I have an idea of where I WANT it to go – but I imagine time, reader’s input and my editor will  no doubt have a say in the finished product.   As with anything I write, it’s always subject to change, i.e., The published version of MEOW turned out VERY differently from the original draft.   VERY. That’s all I’m sayin’.

I’m already ready for the next book in the series. Do you have a timeline for the release of the other books?
Thank you, that’s very flattering to hear.  So far I believe Penguin plans to release one a year – the next one is slated for December 2015.  Something else that’s also subject to change, LOL.

Do all of your novels feature cats or other animal characters?
The Nick and Nora series is the first that features a sassy tuxedo cat, based on my own cat, ROCCO. I have another series in the works that will also prominently feature a Persian cat,  although Purrcy will not be as involved in the actual crime solving, as Nick is.  There’s only one Nick!

We couldn’t help but notice that Nick from Meow if It’s Murder bears a striking resemblance to your very own Rocco. Tell us about Rocco – what’s he like? Does he help solve crimes too?
Yes as I mentioned above, Nick was based on ROCCO after my supervisor at the time advised me to “write about my cat”. ROCCO would rather commit the crimes than solve them, LOL.  He’s definitely feisty, and opinionated.  And yes, he is spoiled! When I was writing the first Nick and Nora he would jump up on the desk and wave his paw at the screen, then leap underneath the desk and start to chew at the cable wires.  He was adopted from a local animal shelter and from the moment he stepped out of the crate, he was – and is – THE BOSS.  Just like Bruce Springsteen. At least he’s the boss in HIS mind.

Are any of the other characters in Meow if It’s Murder based on someone you know?
Well, I’d be lying if I didn’t admit Nora is based somewhat on me – and Danny Corleone is actually based on my friend Barbara’s husband – right down to the actual name.  Only her Danny is a brunette contractor, not a blond detective.  The others in Book 1 came out of my head – I can’t say the same for the following books, though.  (wink, wink)

You have three other cats too. Will you tell us about them?
I have four furballs total – all rescues. Maxx (aka Maxxwell Smart) is a handsome gold tabby, Trixie Belle is a gray striped tabby, seventeen years young, and Princess is a gray and white cat – thirteen years young. Maxx and Rocco I got within three months of each other after my two calicos, Misty and Phyllis, passed.  They are both six years young.  They all have very distinct personalities. Maxx is the “gentleman” cat. He likes to curl up next to my hip and butt my elbow with his head, but he’s always getting in trouble (ROCCO puts him up to it).

Tells us a little bit about your writing process – Where do your ideas come from? Are there any must haves for when you are writing?
Well, first I write out what I call a “thumbnail” outline – a general direction of where I want the story to go. Then I write out a more detailed outline for the entire story, including subplots.  Usually, though, when I do the actual writing, the characters take over and the outline pretty much goes out the window LOL.  So I guess I’m what you would call a “plantser”  half plotter half pantser.  As to where the ideas come from, they can come from pretty much anywhere.  I got an idea once for a YA book from the name on the side of a garbage truck, and an idea for a paranormal suspense from my friend’s address when she moved to Phoenix.
Must haves? Well, I can’t write unless ROCCO is sprawled, usually belly up, on the floor beside my chair, or without music – it’s usually either the soundtracks from SMASH or PHANTOM OF THE OPERA. (Yes, I was one of those people who bombarded NBC with letters when SMASH was cancelled.)

Any advice you’d like to share for aspiring writers?
Read a lot, and keep writing. There’s no such thing as bad writing – it’s all practice.  And keep at it. The difference between a published author and an unpublished one is perseverance. I was in my late 50’s when my agent sold the Nick and Nora series, so it’s never too late.

Thank you so much, Toni. We really enjoyed having you join us today, and we LOVED your book.

If you’d like to get your own copy of Meow If It’s Murder, you can pre-order it on Amazon. The book will be released on Tuesday, December 2nd.

Oh, and one more thing! Toni has generously offered to giveaway an autographed copy of Meow If It’s Murder, along with a bookmark, to one of my readers! How pawesome is that?! All you have to do to enter is leave comment on this blog post between now and Friday, December 5th at 11:59pm. A winner will be chosen using Random.org and will be announced on Saturday, December 6th.

*Giveaway open to residents of the U.S. and Canada. International readers may enter to win an eBook copy of the book.