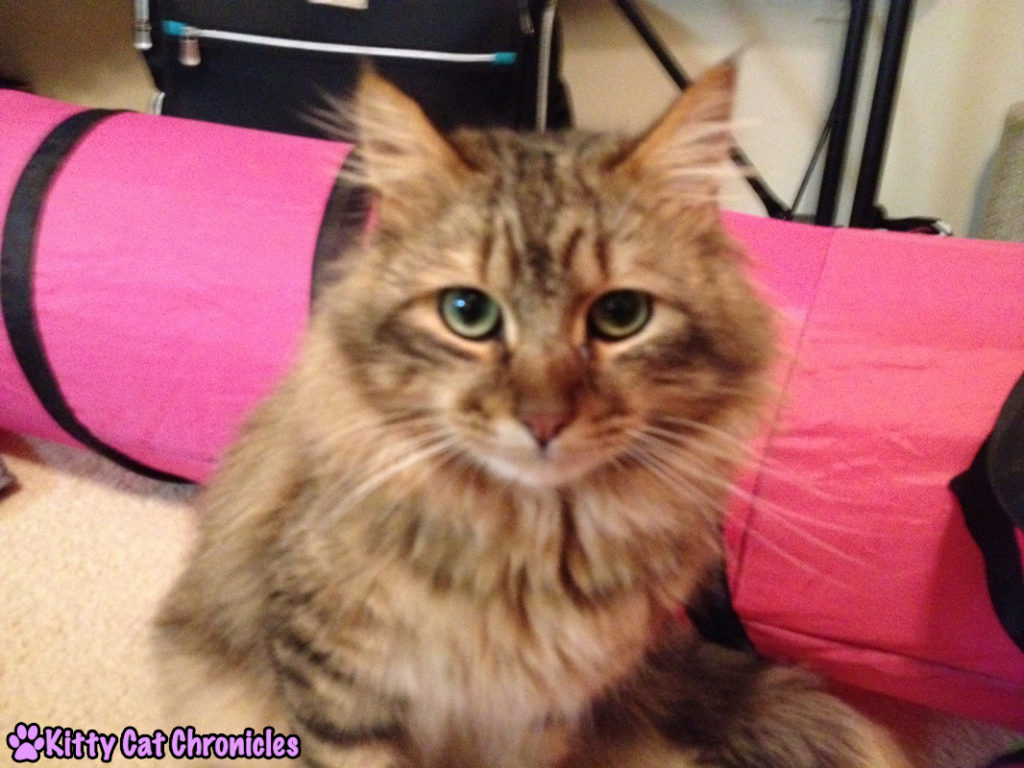 If you know me or have been following my blog, you know that just a few months ago Bobby and I took in Sassy, a stray cat that had been living on our back porch for a few weeks. About a month after Sassy joined the family, another stray started coming onto our porch. He would sit and stare at me expectantly through the window for up to an hour. Finally I gave in and started feeding him.

He would come up to the back door every night around 9:30 or 10 for his dinner. This continued every night for a couple of weeks. We think he was a feral cat though because he would not let me touch him, and he wouldn’t come inside when I left the back door open either. I started building up his trust, and he had even come inside and eaten out of a cat food can as I held it in my hands.

Bobby and I kept joking that we must have a sign on our door that says “Hall’s Cat Rescue – all cats welcome.” We take in one stray, and another shows up! Sadly, I think Radagast (that was feral kitty’s name) moved on because I haven’t seen him recently.

However… someone else has joined the fold! Enter Caster!

Last Saturday the weather was particularly bad, and I heard a distressed cat crying outside. I went to investigate and followed the cry behind our apartment building. Out of the woods runs this beautiful cat who comes right towards me and jumps into my arms. He seemed so lost and scared. I thought for sure he had a family who would be missing him, so I brought him inside and started posting his picture all over Facebook and Craigslist. I made posters and put them up in the apartment complex and on the neighboring streets in the area.

We took him to the vet to get him scanned for a microchip. He didn’t have one. We got him tested for FIV/FeLV so we could know that he would be safe to be around our cats, and luckily he tested negative for both. Bad news — he was not neutered. the vet suggested scheduling an appointment to get him neutered, but we were hesitant since he wasn’t our cat. We made the appointment two weeks out to give his family time to claim him and then took him home.

He got along fine with the other cats but immediately started spraying. After a weekend of him living in the bathroom and crying incessantly, our patience was worn thin. Monday morning on my way to work I called the vet and asked if there was any way we could get an appointment sooner to get him neutered – he was spraying and I couldn’t take it anymore. They said they had an opening that morning. I called Bobby right away and told him to get Caster to the vet, that they could neuter him.

We went back and forth about it for a few minutes, debating on whether it was the right thing to do since he might belong to someone else. Our rationale was that it’s irresponsible to have an unneutered cat, and the options for us were to either neuter him so we could keep him safe inside or put him back outside where anything could happen. We ultimately decided to neuter him. Thankfully that fixed the spraying problem!

However, after reading online, I discovered that the hormones take a few weeks to leave the cat’s system. This means that right now he still has a strong sexual drive… and he directs it towards Sophie! Haha! Sophie can hold her own though, and she actually seems to like him a lot. Even Delilah, the Queen of the house who doesn’t take well to newcomers, doesn’t seem to mind him. So far, the addition of Caster has gone quite smoothly.

Five cats though?!? That’s a lot. We have been feeling overwhelmed, both from a financial and responsibility perspective. We are moving into a house next month with increased rent and utilities, so we are unsure if we can handle having five cats. A couple different friends have expressed interest in Caster if he continues to remain unclaimed by his family and if we should decide we can’t keep him, but we have become attached to him over the past week. For now, we are going to continue to try to find his family and see how things go with a five cat family.

Until then, the Hall Family Cat Rescue is closed for business!