We are pretty big movie fans around here! The Oscars just took place this last weekend, and there were so many great movies, actors, and actresses recognized for their superior performances. We were a bit disappointed though, as we are every year, to see that animal actors were not recognized. Where is the recognition for Best Cat Actor or Best Cat Actress?! They work hard too! In response to this horrendous oversight on the part of the Academy, we wanted to take a moment to recognize our Top 5 Favorite Feline Actors of all time (in no particular order).

1. Crackerjack & Pumpkin, as Crookshanks in the Harry Potter movies

If you’ve seen the Harry Potter movies, then you know that one of the animal characters is Crookshanks the cat, who belongs to Hermione Granger. Crookshanks is a beautiful and intelligent cat who is a great problem solver and has spot-on intuition when it comes to judging people’s character.

Did you know that Crookshanks was actually portrayed by two different cats? They were both red persians – Crackerjack, a male, and Pumpkin, a female. To achieve the scruffy look that Crookshanks had for the movie, Crackerjack and Pumpkin were back-combed and had pieces of their shed fur reattached to their coats.

Fun fact: Playing Crookshanks was Pumpkin’s debut as a cat actress! Prior to being cast as Crookshanks, 10-year old Pumpkin was living at a rescue until her trainer-owner adopted her.

2. Tiki, as Sassy in Homeward Bound: The Incredible Journey

If you’ve never seen the classic family movie Homeward Bound, then you must be living under a rock! Homeward Bound tells the tale of 3 family pets, Shadow (dog), Chance (dog), and Sassy (cat) who make their way across the wilderness in search of their family who had moved. All of the animal characters are cute, but our favorite is obviously Sassy, the smart-mouthed Himalayan.

The cat who played Sassy was a rescue cat who came from a kitten mill. She had reproductive issues, so her breeder tossed her aside. The breeder’s loss, because Tiki was quite the talented kitty! Tiki could do stunts on cue, such as opening doors and eating a pie on the kitchen counter and then stopping to look up at the cameras. She could also stay still for up to 45 minutes! She took her work very seriously.

Fun fact: Playing Sassy was Tiki’s debut role, and she would later go on to play Salty on the comedy series Caroline in the City.

3. Ted Nude-Gent, as Mr. Bigglesworth in the Austin Powers movies 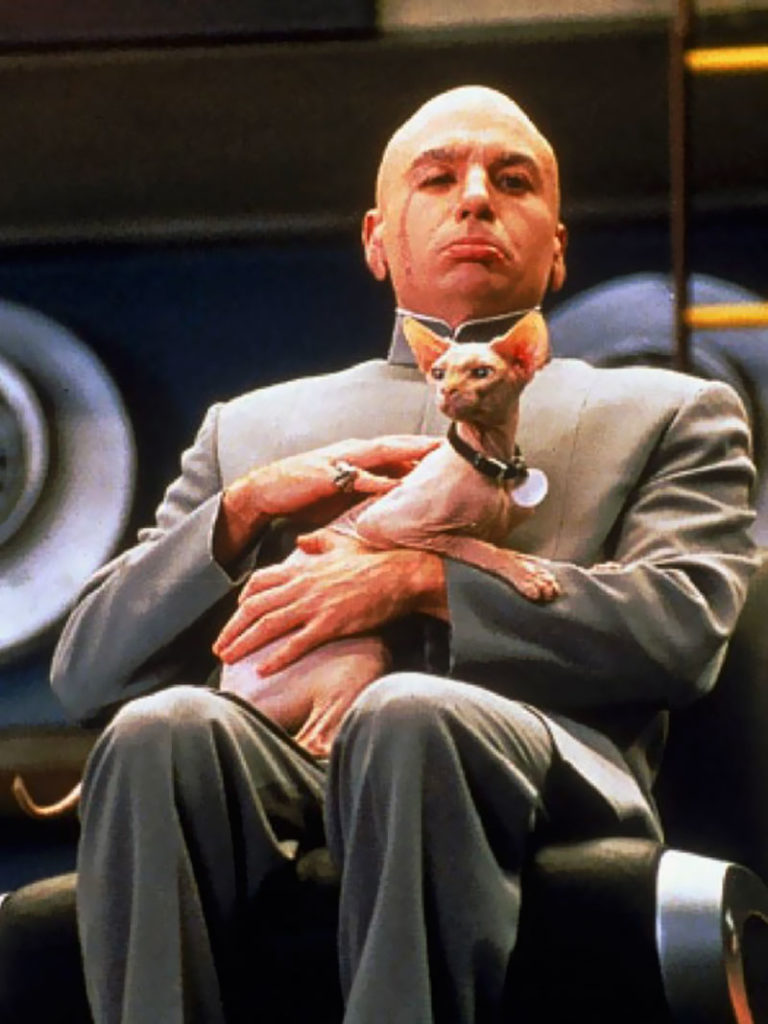 Ted Nude-Gent, an Egyptian Sphynx cat, plays the infamous Mr. Bigglesworth in some of our favorite comedy movies of all time – Austin Powers. Mr. Bigglesworth belongs to movie villain Dr. Evil, the two of which are parody characters of Ernst Stavro Blofeld and his cat from the James Bond movies. They are a comical pair for sure!

Ted Nude-Gent was a pioneer of his time, being cast in a role that was supposedly better suited for a dog because the training necessary was originally deemed impossible to do with a cat. Sphynx’s are easily trainable cats, but filming was delayed a few times because Ted had a particular fondness for actor Mike Myers and would often curl up in his lap for a nap.

Fun Fact: Ted has since crossed the Rainbow Bridge, but his nephews Hairless Potter and Skindiana Jones are carrying on his legacy as a second generation of Sphynx cat actors.

4. Mishka & Bailey, as Mr. Jinx in Meet the Parents 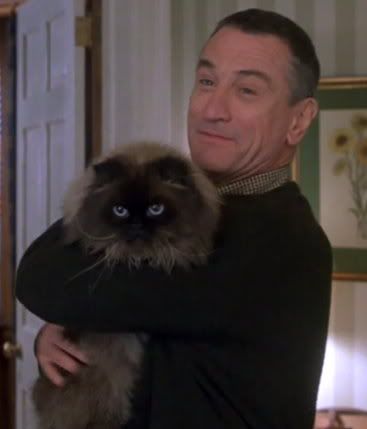 Meet the Parents tells the comical tale of Greg Focker, a guy who is meeting his fiance’s family for the first time. Of course, everything that can go wrong does go wrong. One of the characters that is involved in a few of Greg’s mishaps is Mr. Jinx, his fiance’s family cat. Mr. Jinx is a spoiled and talented cat who comes when called, waves, and flushes the toilet!

Mr. Jinx was played by two cats – Mishka and Bailey. Both cats were trained extensively to do a multitude of tricks ranging from running, sitting, digging, and rubbing on command to climbing trellises.

Fun Fact: Actor Robert De Niro fell in love with Mishka & Bailey and wanted their character Mr. Jinx to be added into more scenes than originally planned. He also spent time playing with them in between takes. 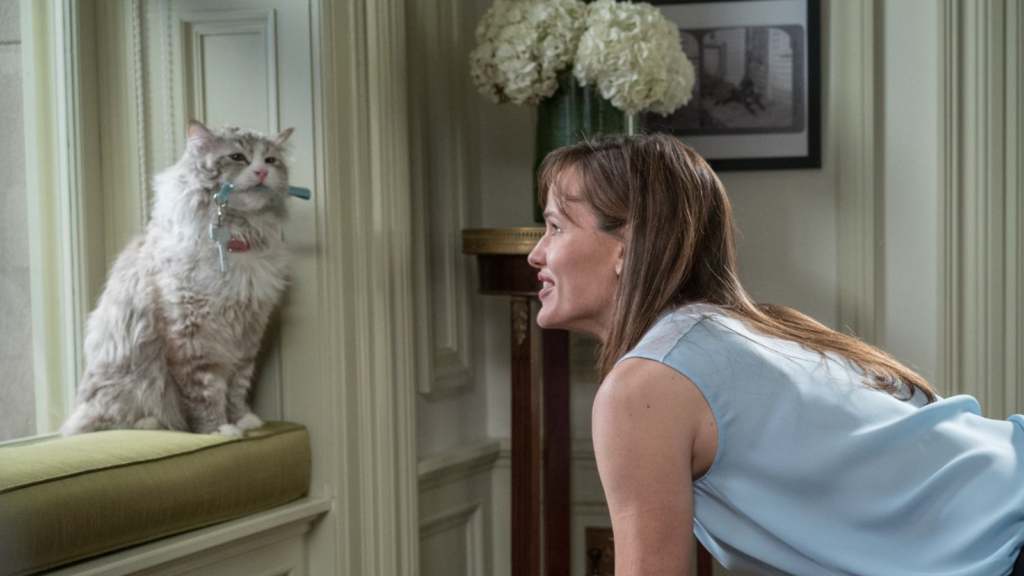 Nine Lives is a kid’s movie about a billionaire, workaholic dad who is out of touch with his family. He gets his daughter a cat for her birthday, and through an accident he ends up body swapping with the cat, Mr. Fuzzypants. In order to be reunited with his human body, “Mr. Fuzzypants” must earn it by reconnecting with his family. Sure, it’s a little bit silly, but it is a favorite of mine because it has two of my favorite things… CATS and Jennifer Garner!

Mr. Fuzzypants is played by several Siberian Forest Cats. This breed was chosen because they are semi-hypoallergenic, and the director of the film was allergic to cats. Jean, Connery, and Yuri were the main cat actors who portrayed the character, each responsible for different tasks. Jean, a champion show cat, was the dramatic star who did all the sitting and looking around; Connery was the action cat who attacked, retrieved, and climbed; and Yuri danced with the daughter and also helped as a stand-in.

Fun Fact: Lil Bub made her cinematic debut in Nine Lives! She has a brief cameo. 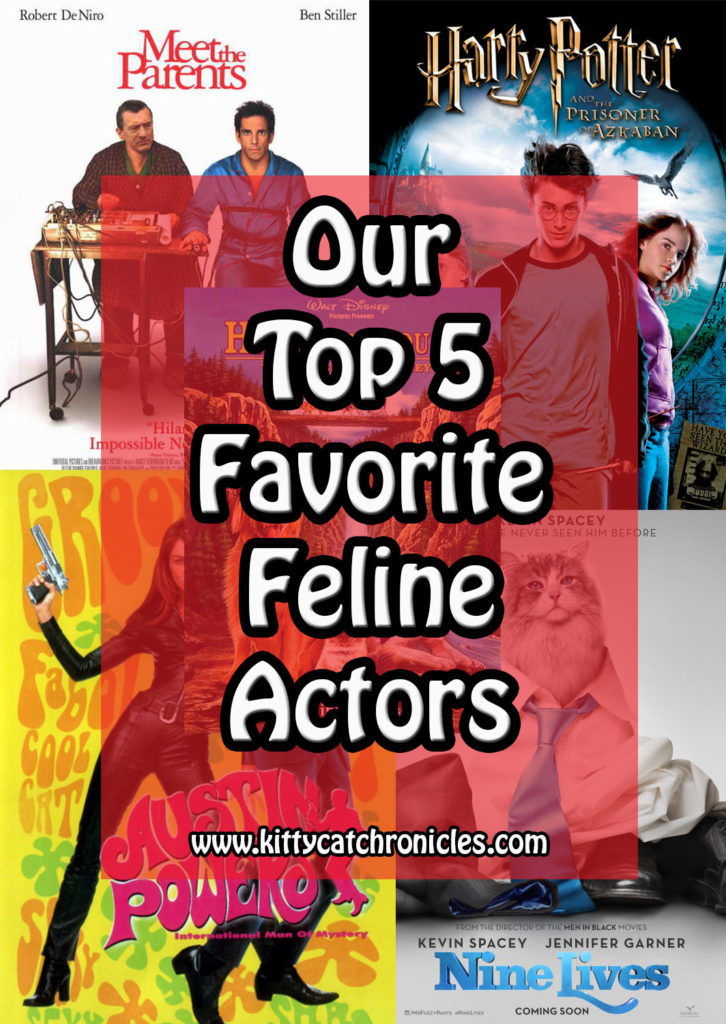 We all agree that this is a group of highly talented cats! What do you think? Anyone else you would add to the list?