Hide Search
You are here: Home / Diet/Raw Diet for Cats / Learning Curves with a Raw Diet

Learning Curves with a Raw Diet

So it’s been a while since my last post. Things have been busy for The Halls of Music, so that’s good news! In the world of the cats…well, there’s never a dull moment there either.

My raw-meat-feeding journey has unintentionally been put on hold. Last I posted, I had just bought a beef heart for the cats, which they all loved! Only two instances of vomit, so we got off to a pretty good start. The heart lasted about a week (I was feeding them the heart mixed with their regular canned food). I went back to the market the following week and got half a chicken and another heart from Rocking Chair Ranch Cattle. I didn’t have time to cut up the meat that night, so I put it all in the freezer.

It was a few days before I found the time to cut it, but when I took it out of the freezer, I realized that the meat needed to thaw. Yes, I know,  it seems like an obvious step, but I completely overlooked it. I threw the meat in the refrigerator to thaw overnight, but then didn’t find them time the cut it again for about four more days. Little did I know that meat goes bad pretty quickly…

When I took the meat out of the refrigerator, I noticed that it looked a bit different than when I originally put it in there. I called my mom and asked her what she thought, and she thought it would be iffy to feed raw meat after it had sat in the fridge for so long. I called another friend, who thought the same thing. They said that if I were cooking it, it would probably be alright but that it would be risky to feed it raw. So much for that!

I placed another order with Rocking Chair Ranch Cattle last week for some chicken liver, beef kidney, sweet breads, a whole chicken, and another heart. The guy told me that it would be two weeks before he would have the order ready (which will be next Wednesday).

Needless to say, there is a bit of a learning curve with this new diet. Being a vegetarian and having absolutely no experience with meat, I’m having to learn the dos and don’ts of keeping meat. I’m also having to figure out the timing of ordering meat, actually getting the meat, and then cutting it. In the mean time, I’ve been feeding the kitties their regular canned food.

However, I did go this evening and pick up some pre-packaged raw meat from TailSpin, which is an organic, all-natural pet food store here in Macon that I just recently discovered. They carry Blue Ridge Beef ground meat for both cats and dogs, so I’m going to give it a try. I got chicken, duck, quail, and rabbit varieties. It will have to hold the cats over until “mommy” can get her act together in making their food myself! I’ll let you know how it goes over!

As for the kitty cat antics, they just keep on coming… 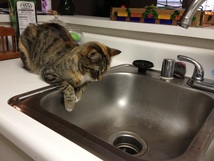 You may remember an earlier post in which I wrote about Delilah’s obsession with guarding the disposal. Here we are over a month later, and she’s still at it. We think that she is just extremely intrigued by it. She seems to even be worried about it at times.
She will go so far as to stand with her front paws in the sink and face up close to the drain, staring down the hole as we run water and wash the dishes. She has seriously devoted herself to solving the mystery of the kitchen sink.

“Why am I the only one who is concerned about this big black hole in the kitchen?!?” – Delilah

Sampson, the trouble instigator, has either found or created (my bet is on the latter) a secret hidey-hold inside the couch. Yes, inside the couch. I found out about it one day when I walked by the couch and was attacked by kitty cat paws coming from inside. Check out the video below. The other cats have since shared in the discovery. I freaked out the other day when I couldn’t find Sophie… until she emerged from the secret hole.

And then there’s Sophie… if you haven’t read her profile yet, you can check it out here. She has cerebellar hypoplasia, so she walks a little funny. Bobby lovingly refers to her as our “drunk kitty.” Because of her CH, she has some trouble jumping and doing other things that “normal” cats can do, but she has gained so much strength over time! Check out this video of her playing in their kitty cat tunnels (which, by the way, are the best cat toy purchases we’ve ever made).

That’s it for this time – check back soon! Until then, I’ll leave you with this cute picture… 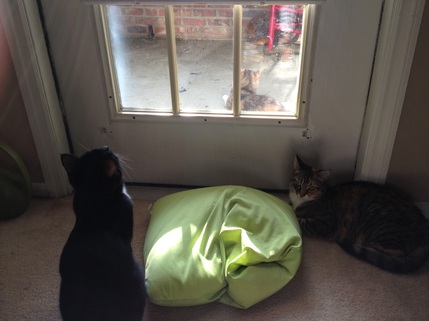