While there are no treatments or cures for cerebellar hypoplasia (CH), there are several things you can do to make life easier for a CH kitty. CH cats are considered special needs, which means they do require extra care and attention. How much extra care is required will depend on how severe the CH cat’s condition is.

There is a wide range of degrees and symptoms for CH. The degree of severity can range even within one litter of kittens – one kitten may be severely affected, while another cat from the same litter may only have a mild case, or might not even have CH at all. There is no set classification system for CH, but there are some general characteristics and symptoms that one can use to subjectively classify a cat’s condition. 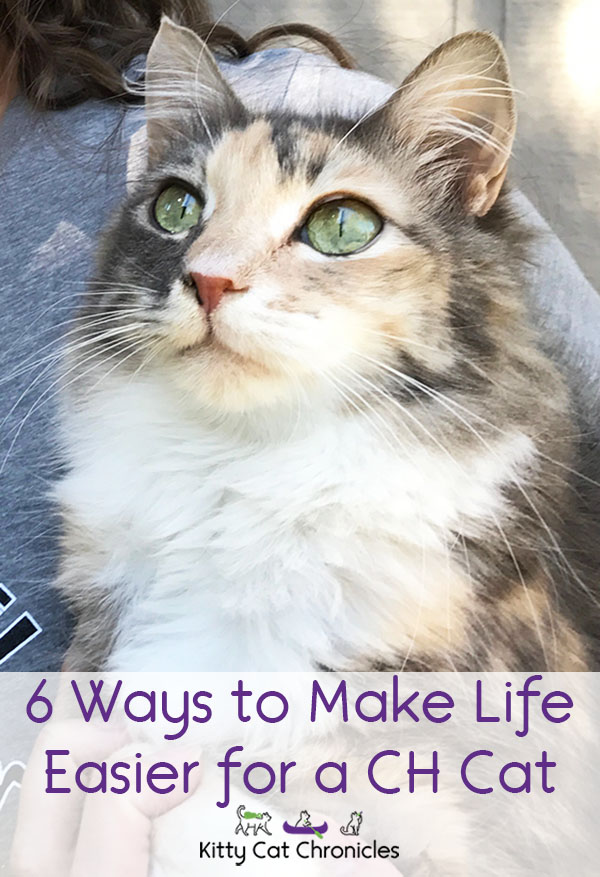 *Disclaimer: This post contains affiliate links. If you make a purchase using one of these links, we will receive a small commission at no extra cost to you.

Cats with mild CH can get around fairly well. They may have a funny walk, trip over themselves some, have mild head tremors, and have some difficulty jumping, but overall they can function well – almost as well as a “regular” cat. Video of a mild CH cat

Cats with moderate CH have more trouble getting around, and their walk is even more unstable – they may appear to be “drunken sailors.” They definitely climb a lot more than they jump, if they jump at all. They also have a wider stance to keep themselves from falling over. They might have a more difficult time eating, as they can’t keep their head still, eating with a “chicken peck” type of motion. Video of a moderate CH cat

Sophie is considered to have a mild-moderate case of CH, so while she doesn’t require a ton of extra care, she does need some. Here are a few things that my husband and I found that help her tremendously:

Because Sophie has a hard time maintaining her balance and falls over sometimes, using the litter box can be a difficult task. Falling over in a litter box can result in not-so-pretty messes. Let’s just say that my husband and I have had to give Sophie many baths. However, this homemade litter box has been a wonderful fix for that! We bought one of those big plastic storage bins, cut a hole in the side of it, and voila! A litter box with high walls! Now Sophie can use the litter box and lean against the high walls to keep herself steady. She usually goes in the corners so she has two walls to lean against. While she does still occasionally fall over and make a mess, it doesn’t happen nearly as often as it used to.

In more severe CH cases, when the cat can’t walk at all, I have seen homemade litter boxes used that have an entire side of a bin cut out so that the cat can drag itself into the box. I have also seen flat cookie sheets used as litter trays. There are many handy homemade litter box ideas out there that suit all kinds of needs; you just have to find the one that best suits yours.

Check out this post for some tips and tricks on how to control litter box odor! 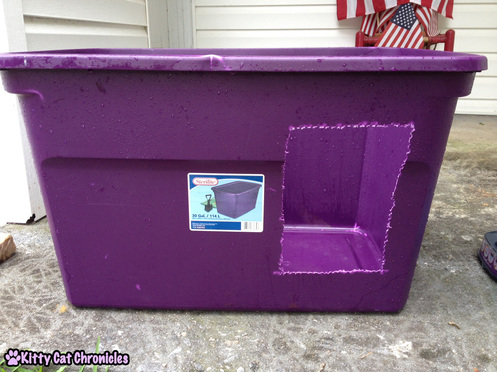 ​2. Use baby gates on the stairs for safety.

Many cats with CH can’t or won’t climb stairs, especially those with severe CH. Sophie didn’t climb stairs at first, but she figured it out pretty quickly. Once she did, that’s all she wanted to do – it was a game of “Hey, Look What I Can Do!” This was a catch-22 for us. We were excited that Sophie had learned a skill that some say CH cats “can’t do,” but at the same time, her wobbly nature made for very nerve-racking stair climbs. She has had a few pretty bad tumbles, which she surprisingly (and luckily) came out of unscathed.

Shortly after moving into a house with stairs, I realized we had to do something to keep her off them. I would never be able to leave the house or go to bed at night without worrying about Sophie. Our first solution was putting a simple baby gate at the bottom of the stairs. She can’t jump over one like most cats can, so we thought that was the ticket. It worked for a little bit…until Sophie figured out how to climb it…

We have since upgraded to a fancier gate that doesn’t have any horizontal parts for her to grab onto and climb. We had to make a few modifications though. See the black towels wrapped around a couple of the spindles? A couple of the gaps in-between the spindles were wide enough for her to fit through, so we added the towels to close the gap in. So far this is working. Keep your fingers crossed though…Sophie has a way of getting past any obstacle we put in her way! 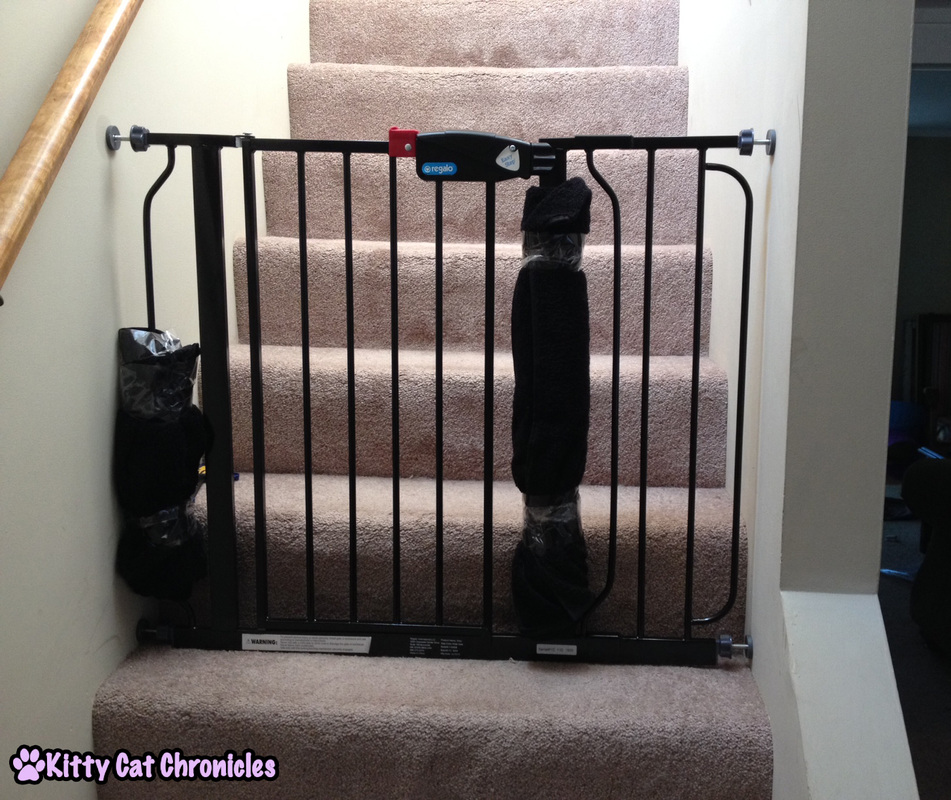 I am not at all a supporter of declawing any cats, but for CH cats, it is especially imperative that they have their claws. Especially those with more severe cases, as they rely on their claws to drag and scoot themselves around. Even Sophie, who has a mild-moderate case of CH, relies on her claws to be able to grip the carpet better when running and playing.

CH cats are also know for having poor jumping skills; many can’t or won’t jump at all. Instead, they are professional climbers.Climbing is essential for them to get around, and claws are essential for climbing. We do trim Sophie’s nails, but we don’t trim them as short as we do the other kitties’. We trim off just enough so she doesn’t get stuck on everything.

Now you may be thinking, “Geez, Emily’s furniture must be pretty torn up.” It’s actually not that bad. It may not be in the best shape, and we many not ever have fancy and expensive furniture, but to me, that’s a small price to pay for the love and joy that Sophie brings into our lives.

4. Use a non-slip silicone placemat + bowl.

Eating can sometimes be a challenge for cats with cerebellar hypoplasia. CH cats are bobble heads. They usually have a hard time holding their heads still, especially when they are concentrating on something like eating. As a result, they often eat in a chicken-pecking style, which can cause a regular food bowl to slide all over the floor. And we all know how hard it is to hit a moving target under normal circumstances, so imagine how hard it must be for a bobble-headed wobbly kitty to eat!

Thankfully Sophie eats on her own pretty well, though we do make sure we place her bowl up against a wall or corner so it doesn’t have anywhere to go. One product that I’ve seen recommended time and again in the Cerebellar Hypoplasia Cats & Kittens Facebook group is what’s called a Happy Bowl. It is a two-in-one, non-slip silicone placemat and bowl. This is a perfect bowl for CH cats because not only does it stay in one place, it makes clean up easy for those who are messy eaters. 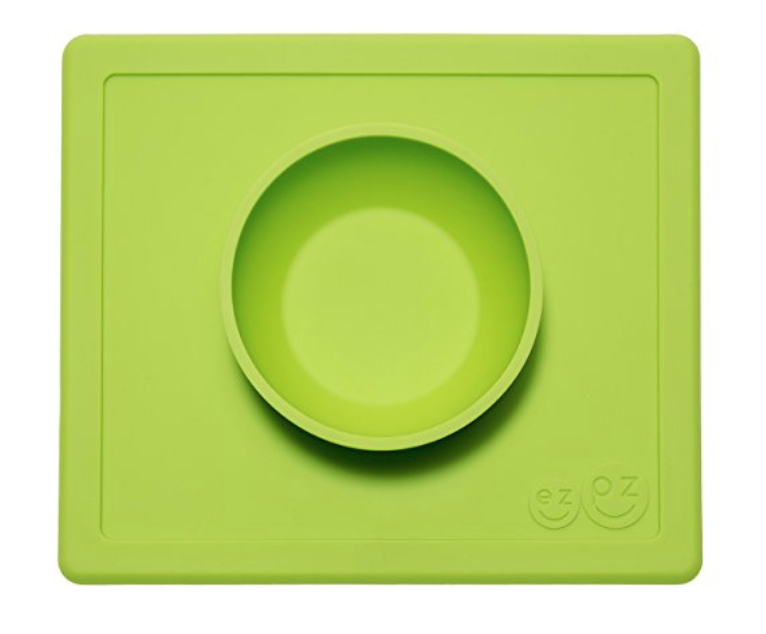 5. Place ramps beside the furniture.

As mentioned before, cats with cerebellar hypoplasia are usually not the best jumpers. Many can’t or won’t jump, and instead climb their way up onto things. Climbing is definitely Sophie’s preferred method of vertical transportation. However, if your CH cat can’t or doesn’t climb, or if you would prefer for your cat not to climb on the furniture, I would recommend placing ramps beside your couch/bed/chairs/etc. That way your kitty has an easy and safe way to get up and down off the furniture. There are some great bedside ramps out there, as well as some that are more portable and better suited for couches and chairs.

You can take things a step further and get a cat tree that has a ramp leading up to it. We have one, though Sophie doesn’t ever use the ramp. She chooses to climb up the cat tree instead. Radagast, our other handicat, always uses the ramp though.

6. Pad the floor with foam tiles.

If you share your life with a CH cat, you know that witnessing the occasional (or maybe even frequent) fall or wipe out just comes with the territory. Sophie has caused me to have mini heart attacks on more than one occasion, that’s for sure! To prevent injuries, especially if you have hardwood floors, you can place foam floor tiles around the areas your cat has a tendency to fall (like underneath a cat tree or around the couch).

These foam floor tiles are also great for adding traction to hard flooring. CH cats often slip and slide on hardwood or tiled floors, so having something like the foam tiles to sink their claws into as they walk helps them to get around a lot better. Rugs and runners are also helpful in that department.

Over the course of the last 5+ years since we adopted Sophie, we’ve learned a lot through trial and error and through recommendations from others about how we can help and make things easier for her. Some things have worked better than others, and that’s okay. It’s a learning process. I hope that our suggestions might be helpful to your and your kitty. Keep in mind though, what works well for one CH cat might not work as well for another. If you have any questions, feel free to contact me!

5 Life Lessons My CH Cat Has Taught Me